Zombie A Go-Go: Dance of the Dead

By Alicia Gregoire - January 07, 2010
Zombie Thursdays is a weekly feature with guest blogger, Miranda. You can read more about her here.

Zombies are social creatures. The undead, much like their living human counterparts, thrive on interaction with one another. They walk, er... shuffle, together. Some special zombies even run together. They eat together; they go on hunting trips together. Together. What a close bond of friendship zombies share! Now of course there are those few zombies who end up being loners. They go out on their own, try avoiding their friends. But what ends up happening to those? They get shot. In the head. And die. Again...

The moral of the story is, zombies, like living breathing people, need to stick together. They need to hang out. Alone, they will die. Just like being alone, humans will die at the mouths of zombies. But there has to be more to life than just chasing humans, eating humans, and hunting zombies, then killing zombies. And there has to be some middle ground for the living and the undead.

And there is... Music! Music, as they say, is the universal language.

This week I am going to introduce you to one of hopefully several more to come musical groups that embrace their love of zombies (and horror in general) and turn those feelings into song!

First up is the band Captain Clegg & the Night Creatures! You’re probably sitting there thinking to yourself, ‘I have never head of them before!’ But if you are a horror movie fan, I’m guessing there is a small chance that you have heard of them, especially if you are a Rob Zombie fan. If you recall the movie The Devil’s Rejects, you probably remember the band Banjo & Sullivan. While Captain Clegg did not appear in the movie, his music did. In real life, Captain Clegg is singer/songwriter Jesse Dayton, who was approached by Rob Zombie to help create the music for the film. As a companion to the film, and promotional tool, an album was released called Banjo & Sullivan: The Ultimate Collection.  Due to the success of that plan, Zombie again approached Jesse Dayton to work on another film, Halloween 2. This time, appeared as Captain Clegg along with is band, the Night Creatures, and performed on screen during a party scene. And like the Banjo & Sullivan album, another album was released with all horror Capt. Clegg music!

I was lucky enough to see Capt. Clegg perform live on the Rob Zombie Hellbilly Deluxe 2 tour, and they put on an amazing show. Although I had seen Devil’s Rejects, I didn’t make the connection until the band was performing and talking about who they were. Afterwards, I decided to buy a Clegg CD, and I’m definitely glad I did! 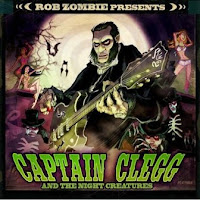 The music is all honkytonk/ bluegrass with a horror twist, with songs like “Transylvania Terror Train,” “Dr. Demon and the Robot Girl,” and “Honkytonk Halloween.” And there are two songs of particular interest to a zombie lover-- “Headless, Hip Shaken Honey” and “Zombie A-Go-Go!”

“Zombie A-Go-Go” is the first song on the album and starts it off with a bang. The lyrics basically tell a cute story about a guy going out on the weekend to a dance when he is stopped by a voodoo priest who shoves a powder up his nose (see Voodoo Zombie blog) and turns him into a zombie! On the way he kills some friends, turning them all into zombies and they go to party on their “own dance show!” “Headless, Hip Shaken Honey” is about a dancer at a bar... however, she is headless and dead, but still knows how to “shake it on down.”

I’m not a fan of country music, and although Captain Clegg’s music at first can seem like country, don’t let it fool you. The songs and lyrics are great, and every song has a different feel to it.  And as a personal opinion, I found the Captain to be a very, very attractive man, so that never hurts! The live show had several cool aspects-- first of all, they have a Go-Go Dancer, Mistress Clegg, performing up with the band; secondly, they have the coolest upright bass I have ever seen (even better than the coffin bass used by the Nekromantix).  After their set at the Rob Zombie tour, the band came out and met with fans, took pictures and gave autographs. I was even lucky enough to get my newly purchased Capt. Clegg CD signed by Jesse Dayton! Although I’m sure I was blushing the whole time...

This music is definitely worth checking out! The band has a lot of videos up on their YouTube page, including some “Cleggisodes” they made to go along with the tour. And for your benefit, I will include the “Zombie A-Go-Go” video today.  So go ahead and listen to the awesomeness of the Captain, and become a “Phantom Jammer,” as their fans are now called!