Going Green for the Undead Planet

Zombie Thursdays is a weekly feature with guest blogger, Miranda. You can read more about her here.
We all know the stereotype-- rotting flesh, blood dripping, eye balls falling out, and green skin. Wait! Green skin?
I get everything else, but the more I think about it, what's up with the green zombie skin? You all know what I am talking about. Just do a search for any sort of zombie image and much more often than not you're going to find a picture of the undead with a sickly green hue. 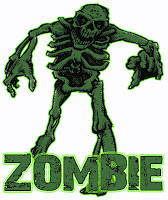 I'm so guilty of this. When drawing a zombie, skin just seems to mean green. Even the Zombie Thursdays banner you see up top every week features just a bit too much green! Many months ago I had a friend working on a zombie knitting project and she came to me asking my advice on yarn color for her little zombie dude. My advice? While a greyish beige color would be far more scientifically accurate, I told her to go with more of a greenish-grey, if not just green entirely. Because although grey would be more realistic, green is so widely recognized as a zombie color, people would instantly be able to tell what she had knitted.
Where does this stereotype come from and why do we keep perpetuating it? I haven't been able to find any definite proof on why we do this, but I have a few solid ideas. And as always, I would certainly love to hear yours!
Many people look to zombie films to get their artistic ideas because, after all, the makeup gurus of Hollywood make real the imaginings of writers and directors everywhere. As always, we can look to The Night of the Living Dead as a huge cultural phenomenon and inspiration to so many zombie loving people. The film was originally released in black and white, so one can't be too sure what the ghouls' skin color was. In my mind while watching the film, I picture a pale sickly grey. And in watching some behind the scenes featurettes and a really cool documentary entitled Autopsy of the Dead,

the makeup used was a greyish color made to make the ghouls appear paler, sick... dead. As production went on, the makeup special effects became more complicated, but no where did I see use of green. And if we jump to the sequel to Night, Dawn of the Dead, which was in color, you can clearly see that most of zombies are completely grey skinned. Almost comically grey skinned, in my opinion (the Hare Krishna zombie comes to mind in particular). But no green.

So if not in the most classic of zombie films, then what? Perhaps the green stereotype came from the re-released Night of the Living Dead. In 1986, a colorized version was released that had ghouls with (you guessed it) green skin. However, the re-re-released colorized version in 1997 had zombies back to being grey! Another possible suspect is the film Return of the Living Dead. More of a comedy than anything else, the poster depicted punk rock zombies, all with green tints. However, one of the most famous zombies from that film franchise, the tar zombie, was not green. But all it takes is one failed colorization or one bad marketing artist to start a green skinned phenomenon! 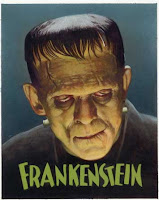 Another possible reason for the green skin could come from Frankenstein's Monster. This may seem like an odd leap, but go with me on this one. Although not in the popular tradition of the modern zombie, I think Frankenstein's monster qualifies as a zombie creature. He is created entirely from the parts of dead people and is reanimated and brought back to life. Sure sounds like a zombie, even if he was incredibly intelligent (he learned to speak French!). In Mary Shelley's novel, the monster is described as having translucent yellow skin where all the veins are visible beneath the surface. So... not green. And later stage adaptations show the monster as a pale blue. However, it seems that when Boris Karloff created the iconic Monster role and the famous imagery of Frankenstein's Monster, somehow that green tinted skin snuck in! That green skin stuck in the minds of people (do a search of Frankenstein's monster and they are always the Boris Karloff looking monsters with green skin), and since the Monster was made from dead flesh, many might have chosen to take that green skin and stick on some other dead things-- zombies. As if green somehow equals rotting flesh!
And finally, I think another huge reason of why we give zombies a green tint is to further separate them from living humans. Zombies are us. They started off as humans, your best friend, mother, teacher, next door neighbor. Because they are transformed into the walking dead and become mindless killers, many people don't want to recognize the one time humanity that is inherent in them. We are afraid of them because we fear ourselves. Although in reality zombies would be flesh colored, maybe a bit paler depending on the length of time spent dead, we don't want to think of them as human. They are the Other. The thing we don't want to be. They are alien to us, and so in our art and imaginings, we color them green, we make them a fantastic color because they are fantastic. Just like Frankenstien's Monster, sci-fi Aliens, ghouls, creatures from the Black Lagoon... they have to look different from us. That's why zombie films are so successful at scaring us-- their zombies do look like us. They aren't green or comical looking, and they could be anyone!
So, the next time you start to doodle, maybe you'll think twice before pulling out the grass green crayon... 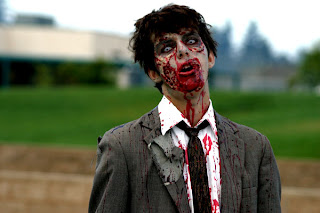