How I Relearned to Love Stephen King

By Alicia Gregoire - July 20, 2010
In the comments from last week's Road Trip Wednesday, Sarah demanded to know what Stephen King sentence restored my love affair with Stephen King*. I've held off answering until now because I wanted to do my answer justice.**


"The man in black fled across the desert, and the gunslinger followed."
With this opener, Stephen King pulled me into Roland's quest for the Dark Tower. This sentence opened an entire universe to me. Parts of it I'd seen before and parts of it were brand new. 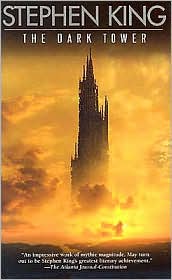 The story of Roland's life is sad, bordering on tragic at times, but he moves on. Constantly. While not exactly Everyman, Roland does take on certain aspects that match. He's on a quest and others join him on the way. BUT, trust me, his life is anything but a morality play.

What Stephen King does is tells us a damn good story about how one the fate of everything is up to one person. You see the odds, you see how things happen, but despite it all (and I do mean despite), you still root for Roland. And you crave more.

King does an awesome job showing how complex and very lonely Roland is. I think the complexity helps carry the story, but, in true Stephen King fashion, we also meet a bunch of other main players along the way. These characters help shape Roland's course and get him to the end.The prose is the most beautiful that I've seen in any of his writing because of the lyrical quality it possesses.***

As a writer, this series means a lot to me. King started writing this when he was nineteen. Let me repeat and bold that for you. Nineteen. It was his first project and took him over twelve years to complete it. He had complete faith in his story and Roland would keep coming back for more over the years. As I'm working on hard getting my first project out to the masses, I remember how long it took for The Gunslinger.

And just like Roland chasing the man in black with the Horn of Eld by his side, knowing that it took Stephen King that long to publish his baby gives me hope.


* The reason that it needed to be restored in the first place was because of Gerald's Game.
** And I still probably won't.
*** Totally aware of my rose-colored lenses here.
_________
Last.fm hit of the day: Nearly Lost You by Screaming Trees
Dark Tower reference fangirl writing