The Zombies are Coming!!

On the quiet streets of a city near you, they come by the thousands. Slowly ambling along, moaning for brains, they fill the streets and grab innocent bystanders forcing them to join in the mob. The zombies have invaded!

As cool as it would be to have an actual zombie apocalypse on our hands, what I’m describing is actually known as a Zombie Walk! Also known as a Zombie March, Zombie Crawl, etc. Zombie Walks are an interesting phenomenon that clearly show the growing trend towards zombie culture and the world’s fascination with the living dead. During these marches, people dress up in tattered clothes, use copious amounts of fake blood, and apply their best zombie makeup. The marches are typically large organized events (although some spring up spontaneously), and rely heavily on word of mouth and internet advertising to spread the when and where of these gatherings. The walks can have several different purposes-- they often help raise awareness and funds for local charities, express opinions about current political issues, tie in to pub or bar crawls with a horror theme, or sometimes they’re just for fun and celebration! 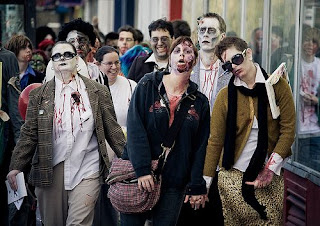 One of the first recorded Zombie Walks was in Sacramento, CA and took place on August 19, 2001. Billed as the “Zombie Parade,” it was used to help promote an annual film festival; the parade is still an annual event. Over the years many groups have tried to use their Zombie Marches as record breaking events. There seems to be some debate and confusion over which walks have been verified record breakers, but as far as I can tell, the current verified record walk took place just last month on July 3 for Seattle’s annual “Red, White, and Dead” Zombie Walk. The Guinness Book of World Records confirmed 4,200 zombie were an attendance! The event was organized by Fremont Outdoor Movies.

I’m sad to say that I have never been a part of any Zombie Walks. I’ve had the opportunity to go to a couple, but for whatever reason, it never worked out or I didn’t have anyone to go with (because, let’s face it, it would be so much more fun with a group of friends!). Another type of event I’ve been hearing a lot about lately has been Zombie Proms, which, you guessed it, are events held at local clubs or bars where people wear their best zombified dresses and tuxedos and dance the night away. Recently in Chicago, there was even a Zombie Disco!

I’m making it my goal this year to go to at least one Zombie Walk or event and report back to you all! I have a zombie-themed costume planned for my upcoming visit to DragonCon, and I’m sure to run into some other zombies while I’m there... but I’d really like to attend one of these walks.

And, I just read something on Facebook today that pertains to my Chicago area readers-- the independent organization, The Horror Society, just made a post today about some major zombie event coming up in Chicago and they’re “calling all zombies!” The post didn’t say whether it was a zombie walk, pub crawl, general gathering, or even for some kind of zombie film. When I know more, I will definitely let you all know! In the meantime, for those interested, they would like you to email admin@horrorsociety.com. Anyone with me in joining up to be a zombie?

Have any of you participated in a Zombie Walk before? Tell us about your experience in the comments!

Until next time, remember... the dead should stay dead!