August Reads, or The Mac and Cheese of All Books

Every Wednesday, YA Highway asks their readership a simple question to answer on your blog. Once you answer, you link your blog in the comments for other readers to hop on board. This is Road Trip Wednesday.
Today's question: What's the best book you've read this month?

I read some pretty good books in August like Stephen King's On Writing and a collection of short stories by Sherrilyn Kenyon, but the best of the month is an old favorite - The Austin Family Chronicles by Madeleine L'Engle.

In it's day, the series was considered contemporary, but now not so much. (Mentions of The Cold War will do that.) Even with some of the more dated material, L'Engle tackles big subjects in such a way that they're timeless - especially on the subjects of death and faith.

As some of you know, my cousin Danny passed away on July 20th. He was 28. While I wasn't close to him, the news still hurt and I spent the rest of July passing through shock. His wake and funeral were the hardest I've been to and I hated to see my aunt, uncle, and my other cousin - Danny's sister - be so full of pain.

My on-again, off-again fight with the big guy upstairs was back on. I hadn't been this pissed at god since I was in high school and all the questions came roaring back. Why was my family being put through this? Why did he get taken away from his sons? Why the hell did this happen now? 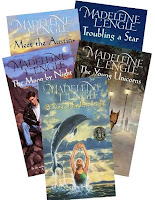 Without fail, I turned to the Austin family. Whenever I read about Vicky's experiences whether it's struggling with change, working her way through grief, or dealing with boy issues, I feel more grounded. More importantly, I feel comforted and who doesn't want comfort especially when things fall to shit?

By the time I finished the final pages of Troubling A Star (right as vacation kicked in), I felt more at peace and back to my normal less angsty self. I still think what happened is totally unfair, awful, and everything else. I still question the why of it, but struggling with the tragedy while someone more articulate than me guided me along was what I needed. These books was the perfect friend for those two weeks.

Head over to YA Highway and see what other people read this month.