By Alicia Gregoire - November 19, 2010
Happy Friday, Lurkdom! I hope you all have splendiferous plans for the weekend. I'm going to continue to work on my word count and ponder the writing life*.

I've been thinking a lot about first drafts. For the last two years, my writing group has been critiquing Nemesis' sophomore effort--a novel of undetermined genre or target audience. This past Wednesday marked the review of his final chapters** for submission. There's not much nice to say about Nemesis' writing***. It's not stellar, it's not mechanically sound, and the plot is thinner than gruel. I spend a good chunk of my critting time yelling at the page (and not in a good way) and tweeting comments about what I'm reading.

Wednesday wasn't any different. In fact, it was worse. As I read chapter 35A, I grew more and more enraged. Pages of pointless backstory. No action. No dialogue. More repetition than Groundhog Day. Nothing happened. I read ten pages of straight telling. I had enough.

People. If you are working with a critique group, it's a common courtesy to make sure that you still put your best foot forward. Remember, your first draft is for you. This is the draft where you're figuring stuff out. If you're unsure about your novel's direction, do you really want a group of writers dissecting it? 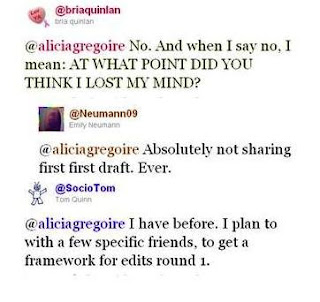 While you can show your first draft around, don't bring it to a huge group. Even Jack Ketchum has one trusted beta who sees everything beforehand. If you do decide to share your first draft, pick who you share it with carefully. Danielle and Hubby are the only ones who see anything from my first draft. Everyone else sees Draft 1.3 or later.

Am I saying don't ask for help or suggestions? Far from it. Writing doesn't have to be a solitary venture. NaNoWriMo and Twitter are proof of that. Get help on that tricky scene or bounce ideas about how to effectively off Carlo from down the street, but don't share your shit draft****. It's unfair to your readers. It's unfair to you.


* Not really much on the second part. I don't actually do things like ponder. My brain is much too full for that.
** One of the chapters, by the way, was brand new and nowhere near the end of novel. Yeah, Nemesis likes to submit out of order and expect it to make sense.
*** Or story.
**** Except for when applying the method found in the previous paragraph.
_______
Last.fm hit of the day: Salt of the Earth by Crystal Pistol
first drafts rant writing