Zombie Thursdays is a weekly feature with guest blogger, Miranda. You can read more about her here.
Okay... did I forget that yesterday was Thursday? Yes, yes I did. How is that possible? I'm not entirely sure. A part of me knew it was Thursday, on some level, but another part of me didn't even register that I knew it was Thursday. In the end, it's best not to ask. Go on thinking I am a total dork. Which I am. So it's all good!*
Moving on! Lately I have been trying to read more. Keep in mind that I am a voracious reader (typically). I love books and I love my words. But sometimes life gets in the way and I don't always have the time to sit down and read like I'd want to. As such, I've had several zombie books sitting around for over a year now. They've been sitting on my book shelf sad and unread. Until now!
These past few weeks I've been reading the awesome World War Z-- an Oral History of the Zombie War by zombie author extraordinaire-- Max Brooks! We've chatted about him before, you'll know him as the author and genius behind The Zombie Survival Guide. That book is, of course, a humorous take on how to prepare and protect yourself during the coming zombie apocalypse. World War Z, on the other hand, has the same awesome writing quality and scientific believability that the Guide has, however, there is less of a humor element and more of a seriousness and historical voice at play which works incredibly well for the novel. 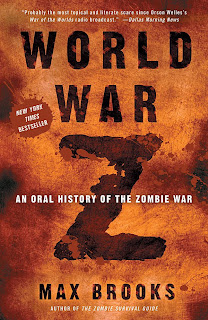 Written as a series of "reports" that were collected by the author some ten years after the end of the Zombie Wars, the book reads in the form of personal accounts by a variety of survivors from all over the world. Occasionally, the author will interject a question, but many of the accounts are long descriptions by the many people who witnessed the beginnings, middle, and end of the zombie plague. This book is a smart read and almost assumes the reader already knows something of world politics, history, and geography. Although a lot of the writing is very scientific and technical (in theory, the reader should have "survived" the Zombie War as well, so the basic history and terminology should already be known), it doesn't distract from the overall story. If you're nervous about reading something with a lot of medical and military terms, don't worry! It seems a bit daunting at first, but then you get sucked in the overall story and idea of the novel, so it doesn't really matter if you don't know exactly where Rajasthan, India is or what HE 155s are. Often Brooks explains terms in convenient footnotes.
World War Z is an engaging and emotional read. It's about families, survival, death, terror, and humanity as a whole. I particularly enjoyed the accounts on how the pharmaceutical companies immediately cashed in on the panic of the zombie virus (at first, it was thought to be a form of rabies) and the section that told about how a bunch of celebrities tried turning the War into a reality series... to disastrous results! Both of these topics are so relevant in our current world and it is all too easy to believe the fictional account as the result of a zombie outbreak!
Also I should note, this book is in pre-production to be a film, produced by Brad Pitt. I'm not entirely sure what I think about this. The great thing about the novel is all the different accounts. It's a story of history. But I fear the film version will just turn it into a high budget, high action, scary zombie flick that is just trying to cash in on all the recent zombie mania. Hopefully Brooks will be involved with the film, not just a writing credit, to preserve the overall feel and tone of the work. Fingers crossed!
But I can't recommend the novel enough, and I'm sure many of you have already read it! I feel like a zombie-culture reject for not having read it sooner! But like any good book, it's always there, just waiting to be opened. So do yourself a favor, and pick up a copy of this one soon!**
*And based on a tricky idea from Alicia, I'm past dating this entry for Thursday anyway, so I didn't even have to come clean about missing the day!
**I have also been told that the audio book for this novel is also very well done and read! So, feel free to pick up the CDs for your iPod or car ride-- another great way to enjoy awesome novels!***
***Notice how I am adopting Alicia's footnote system? Mwahahahaha!!!!!
authors books Max Brooks Reviews zombies