Zombie Thursdays is a weekly feature with guest blogger, Miranda. You can read more about her here.
Today I am hijacking my own guest spot to write a totally different blog that isn't about zombies! But don't worry, the zombies will be back at their regularly scheduled time next Thursday.
Besides zombies, I do have a few other interests in my life. One of those interests is a film called Repo! the Genetic Opera. Never heard of Repo? Don't feel bad, most people haven't heard of it. 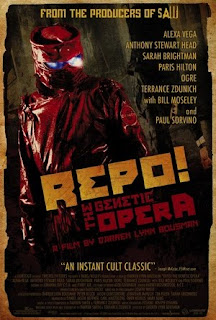 Begun as a stage play in Los Angeles, Repo! started off as a ten minute goth-rock opera called The Necromerchant's Debt. The story revolved around a Graverobber who is being stalked by an organ Repo Man trying to collect on a debt the necromerchant owed. After many evolutions and revisions, the play turned into a full length performance that eventually made it's Off-off-Broadway debut in New York to highly positive reviews. The very first director of this full length opera was Darren Lynn Bousman who later went on to direct three of the Saw franchise films. After gaining some success in the film industry, he promised his friends that if they ever got the chance to make Repo! into a movie, they would.
And they did.
There's a lot of history and controversy surrounding how the film was made, how it was all but abandoned by the film company producing it, how the director and creators used their own money to tour the film around the country so fans could see it in theatres, and how another film with a very similar (read-- stolen) plot was released a year later.
But I'm not going to bore you with all that. What I want to tell you about is my other passion project-- shadowcasting Repo! the Genetic Opera!
A shadowcast is where a group of people do a live performance of a movie with that film playing on the big screen behind them (although Repo! is nothing like Rocky Horror, it is shadowcasted in that style). Shortly after Repo! was released, I met a group of people who were also fans of the movie and who traveled huge distances to Chicago to watch it in the one theatre that was showing it. Similar groups of fans were forming all over the country and we all came together and started creating casts to do these performances.
In our shows, we stay true to the material and blocking in the film. But the most fun part about shadowcasting is we add in our own jokes, sight gags, crazy costumes, and other little bits that make the experience truly unique. Audiences aren't just watching us do the film like puppets, they get to see the film acted out, but even bigger and as more of a spectacle! We encourage our audience to come dressed up in costumes as well, and since Repo! is a legitimate opera (all music, no dialogue), we want everyone to sing along! And the movie has something for everyone-- an all-star cast, beautiful scenery and costumes, a tragic plot worthy of Shakespeare, a variety of musical styles, comedy, nudity, blood, guts, and gore. 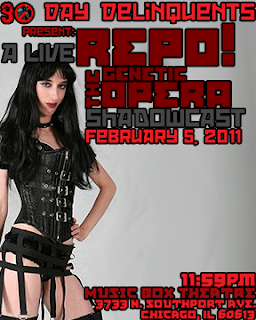 My group, the 90 Day Delinquents, has been doing shadowcast performances of the film since April 2009 in Chicago. We have a show that is coming up next week and for anyone who lives even remotely close to the Chicago area, this is my personal invitation to you to come out and see the show! Our performance is on Saturday, February 5th at Midnight at the historic Music Box Theatre. If you don't live in Chicago, but think this whole Repo! thing sounds intriguing, don't be sad! As I said, there are still active casts all over the world and there may just be one near your hometown. You can check out the official Repo! Shadowcasts page to find one near you.
I will leave you with a video from our very first show ever. This song is called "Zydrate Anatomy" and is probably the most popular and best known scene in the film. If you're looking for me in the clip, I'll give you a hint-- that's my character in the flyer above... you can't miss me!
90 Day Delinquents Chicago films Music Box Theatre Repo shadowcasting