I lived in the same town my entire life, not even moving away for college*. Even though I have moved four times, it was only to another section of town. That I might be permanently stuck here hasn't escaped my notice, but living here is convenient and familiar**. Not to mention filled with things that make you go "huh?"***

Even the grocery store where I shop has moments that throw me, though most of that is food related craziness. (Orange soda ice cream topping anyone?) Though today's post isn't about food. 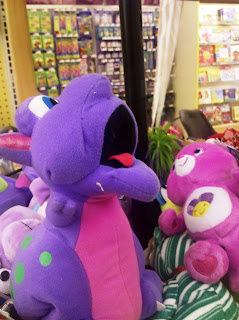 Meet Shoester, the bizarre purple monster thing I found in the magazine aisle. He looks like a whimsical Barney on crack****. His label tells me he's a "creature of delight," something I'd rather not think about. 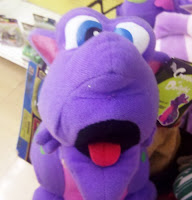 I have to wonder why he's cross-eyed and why his mouth is constantly open. Doesn't he get neck pains from his head being tipped back like that? Is he trying to catch raindrops or is there something more sinister happening here?

Fortunately for me (and you), this non purple people eater comes with a character sheet and (un)lucky for you I have a camera and aren't afraid to use it. 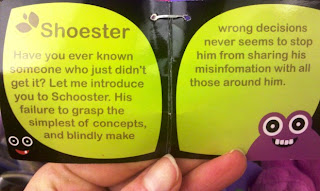 Hmm, Shoester sounds like a trouble maker. He also sounds a bit like a first draft. I'm not sure what point his character sheet is trying to make either. One thing is clear: you can't trust purple critters no matter what.

What bizarre things have you found recently?

* THAT, Lurkdom, wasn't by choice.
** Plus, I'm lazy.
*** For past examples, check out the creepy mall.
**** Or possibly a steroid-infused Figment.
_________
Last.fm hit of the day:  Slit My Wrists by Murderdolls
life reluctant townie shopping toys