Zombie Hats! A Guide for our Zombie Readers

Zombie Thursdays is a weekly feature with guest blogger, Miranda. You can read more about her here.
You asked for it... I will deliver! Actually, my friend Mary suggested a theme of "zombie hats" in her comments during our 'Race to 150' contest. I think she was just being silly, but I thought, "hey, why not?" Once I committed to humoring her, my next concern was, "will I be able to find enough information on zombie hats?" Turns out, there are lots of zombie hats in existence! Zazzle and Cafepress have tons of people who have created hats with a zombie theme. Even one hat displayed a trio of Zombie Corgi dogs! Very random...
But instead of just displaying a hat you can buy online, let's discuss something academic. We all know that zombies are permanently terminated by killing the brain, usually by a shot to the head. Because zombies are so vulnerable in their heads... why is it that we don't see more zombies wearing protective head gear? Literally, why aren't they wearing special zombie hats or helmets? Zombies may not be the most intelligent, but all "living" beings know enough to protect that which can be damaged. And there is debate that zombies will have some residual memories of their humanity. And in some instances (Romero's Land of the Dead), zombies learn. They adapt.
For any zombies out there that are reading this blog, guess what? I found a hat/helmet just for you! For a mere 340 dollars, you can own your very own bullet proof helmet! This helmet exceeds basic military specifications, and weighs only 3.2 pounds (beware of decaying neck muscles; the weight of the helmet may decapitate you accidently). Made from multiple layers of Kevlar and other materials, this helmet will provide maximum protection and comfort. Don't get caught in the crossfire of an angry mob without one. You'll be thanking me later. 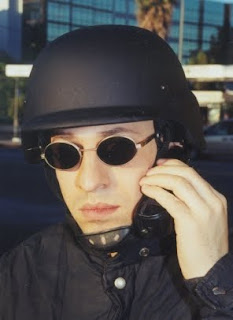 This Zombie Hunter is prepared... why aren't you??
And thank you to everyone who entered and participated in our 'Race to 150' contest! Our followers are still growing and we encourage everyone to still spread the word. I have a feeling there will be more contests in the future, so please join the ranks of the Lurkdom. Also, keep the suggestions coming, and your idea may be our next entry!
hats zombies