Zombies Ahead! Be Alert!

Zombie Thursdays is a weekly feature with guest blogger, Miranda. You can read more about her here.
It's that time of the year again-- the weather is getting warmer, flowers are blooming, and... road construction has started back up again. I don't know about you all, but I hate construction. Before I moved to Chicago, I was frequently making the three hour drive up to the city. But with all the stupid construction, it would turn that drive into four hours or more. It's beyond frustrating to get stuck in road work that seemingly never produces any real results. We've all experienced it-- broken up roads, shut down lanes, and endless orange cones stuck on the same stretches of road for years and years. Are they seriously working or not?
I know all the road work creates jobs and stimulates the economy, and that's all great. But it sucks going at a slow crawl and never really knowing what's going on ahead. Why are we going so slow? Is there a wreck? Is it only one lane? Are both lanes closed? Is there a detour? Not to mention the HUGE fine you'll get if you're caught speeding in a work zone. It makes me stressed just writing about it!
Is there anything that could make work zones more entertaining? Apparently some hackers in the last few years have found a way to put a smile on drivers' faces... or put panic in their hearts. By tampering with the digital construction signs, pranksters have started warning drivers not of closed lanes, but Zombies Ahead! 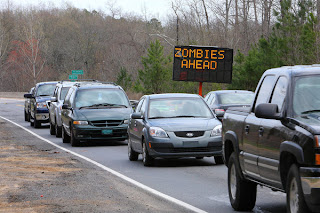 Just a few weeks ago, signs in South Carolina cautioned drivers that there were, "Zombies Ahead," and on other signs stated, "Watch for Hunters" and "Be alert for Tanks." A similar incident occurred in Texas back in 2009 with just the warning of zombies ahead.
Although officials claim they don't know how or who changed the signs, apparently it can be pretty easy to reprogram those signs given a certain set of circumstances. Most workers don't bother to change the factory default password setting to change text and a smart hacker can know the code for certain sign models. Also, laziness on the part of workers and not locking the back panel make for quick and simple access to the keyboard. Although it is a misdemeanor in most states to tamper with the signs, it seems like law enforcement officials had a good sense of humor about the prank and were able to easily change the signs back. 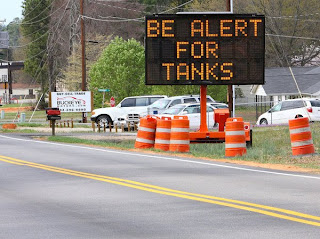 What would you think if you saw a sign warning of Zombies Ahead? Would you laugh or have a moment of nervousness? 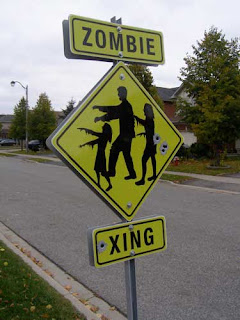