Zombie Thursday presents-- Something New! and Hellraiser, the Comic Series!

Zombie Thursdays is a weekly feature with guest blogger, Miranda. You can read more about her here.
Last week on the Facebooks, I mused that I may not write about zombies every Thursday. No one seemed to comment on this fact, except my friend Mary, so I decided that was a sign that everyone thinks it is a great idea!* Today I present a new segment in Zombie Thursdays--

Zombie Thursdays presents-- Miranda Talks About Other Scary Horror Stuff that isn't Necessarily Related to Zombies, but that She Thinks You'll Enjoy Too! (Working Title)
So today, I want to further talk about another obsession of mine. I've actually spoken about this a lot already, so it may come as no surprise when I tell you I am a huge fan of Clive Barker and, specifically, his novel The Hellbound Heart. If you are unfamiliar with this book, first I suggest that you should read it** and, secondly, you may be more familiar with it under its cinematic title Hellraiser (and the seven other movies that followed in the franchise). Like a lot of multiple movie film franchises, only the first one was fully directed and envisioned by Barker. In fact, Hellraiser is an insanely close adaptation of the book with only a few minor/major differences. 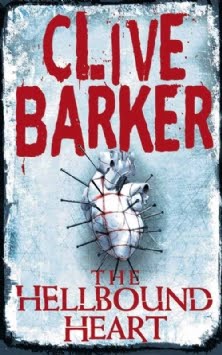 While several of the films that followed the original have a lot of great moments, scenes, and lines, really only the first four are seemingly a complete set and story arc (but don't forget, Clive Barker only wrote and directed the script for the first film. Keep this in mind). Of all the eight Hellraiser films, I recommend these the most! And please, do not refer to Bloodline as the "Pinhead in Space" one... if all you know is that the fourth movie takes place in space***, you haven't seen it. Or if you have, you've missed the point entirely.
What I really want to share with you today is the *new* Hellraiser comic series that recently came out! What's so special about this series is that it's the first time since the original novel and movie that Clive Barker has begun writing for the characters and the world of Hellraiser again!**** Unlike the old school Marvel comic series that was based off of the world of the Cenobites, this new undertaking is 100% cannon to the novel and the first two films. It is not fanfiction. It is not a reboot. It is completely legitimate to Barker's characters and world. Which, for a hardcore fan like me, is AWESOME!

The art work and writing (co-written by Barker and Christoper Monfette) are incredible. Not only is the tone and story preserved and expanded, but some familiar faces have been brought back, including the "Female Cenobite" and everyone's favorite girl, Kirsty Cotton! If you are familiar with the whole film franchise, so far it seems as if they are ignoring the events surrounding Kirsty in Hellseeker. Which is probably for the best... The series plot revolves around a bored and jaded "Pinhead" who is trying to reclaim his humanity. Meanwhile, Kirsty and other puzzle-box survivors have joined forces to form The Harrowers. Their mission is to seek out the remaining gateways to Hell and destroy them once and for all. Some really awesome artwork and visual elements include a pipe organ made from dead bodies (yes, really. It's pretty awesome) and a carousel music box that functions as a portal to the Cenobites!
If you're a horror fan, a comic fan, or a Barker fan, the new series is something you must check out! Anyone can pick this series up and will probably enjoy it. You don't need to be a mega-fan (like me) to understand everything that's happening, however, I highly encourage that you at least either read the novel or see the first (and preferably the second) film before diving in, just to give you a better understanding of the world and the history. The Hellbound Heart can always been found at Borders or Barnes & Noble, and right now the entire franchise (except the third film) is available for instant streaming on Netflix.
As a warning-- both the book and the movies are graphic. Despite what you may think, these are not "slasher" films, but they are violent and extremely sexual in nature, so if that's not you're kind of thing, don't watch. But I do promise, the violence and themes all have a reason beyond normal "torture porn" type of films. This is intelligent horror. 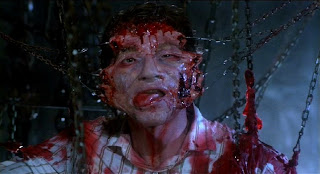 As for the comic, the first two issues were so outrageously popular, the first printings are completely sold out from the publisher! There's a chance you may still find them in your local comic shop as well as a second edition printing should be available online. Both issues #1 and #2 have several covers, easiest to find are Covers A and B. As of now, I do not believe there is a release date yet for #3.
I hope you enjoyed today's new segment for Zombie Thursdays! What books-t0-movies-to-comics-to-movies-to-books series do you enjoy? There are a lot of them out there, share your favorites!!
*Or everyone was just too lazy too comment on my idea.
** See my above warning about the content of the book before you rush off to buy it. Especially if you are younger.
*** While part of the film does take place in the future on a space station, it has little to do with being "in space." In fact, the movie spans over four centuries of history and myth. This is no "Leprechaun 4" which really was just "Leprechaun in Space."
**** Yes, I know that "Pinhead" is supposed to make an appearance in the Third Book of the Art. But it hasn't been finished or published yet, so we can only guess what the encounter between the Lead Cenobite and Harry D'Amour will be...
Clive Barker comic books comics fandom films Hellraiser