The Daring Young Girl on the Flying Trapeze

By Miranda - July 19, 2011
Miranda here again at the wheel, ready to share with you another "normal" hobby of mine. I say "normal" with quotation marks because most people might not think this interest is for the average person.
I've had a life long obsession with the circus. I'm not sure how or why it started. It could be because my grandfather is a Shriner, and every year they would put on the "Shrine Circus" for charity and I would attend with my family. Or it may be because in 1st grade, my school put on a "circus." I auditioned to be the Ringmaster (my brother had been the one in his year); I was the best reader in my grade, but they gave it someone else-- a boy, because girls aren't Ringmasters... Or it may be from repeatedly watching Dumbo as a child (I now collect Dumbo things). I'm not really sure of the reason, but it stuck.
As a result, I wrote my thesis about side shows and freak shows, I go out of my way to buy anything that has to do with circuses, and now I've made the leap (literally) into learning a circus art-- Flying Trapeze!

A friend of mine is involved with several classes here in Chicago, mainly learning silks. I've been looking at her photos and videos since I've met her, and I've thought it is one of the coolest things a person could do, and I admire her talent so much . As much as I love the circus, I guess I always assumed that the performers and athletes were people who were born into the lifestyle. I never considered that there would be places that taught these skills and arts. But there are!
Recently on the Facebooks, my same friend posted a link to a Groupon for a class at the Trapeze School New York (Chicago location). I didn't even have to think, I jumped on and purchased a pass for my first class. After a few weeks of schedule matching up (I wanted to attend with her; let's face it-- something like this is more fun with the company and support of a friend), I was finally able to pick a time and register for my first class!
I wasn't entirely sure what to expect for the first time there. I figured it would be a very basic introduction to the trapeze, mostly working on a bar that was on the ground and maybe getting to do one flight on the bar, just hanging there and swinging. Nope! Right from the start, after I signed my waiver, they were attaching a safety belt to my waist and began explaining how to do a knee hang and back flip off the bar and all the calls and signals and when to do what. It was a lot of information, but the newbies watched a few seasoned students do what was being explained to us. Soon, it was my turn to climb the ladder and go. 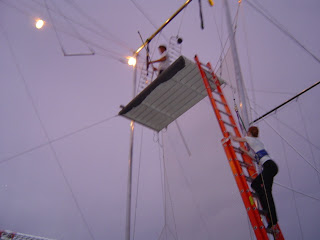 Again, I just assumed I'd do my first jump from the platform and maybe get to hang for a bit and then drop into the net... when I started to get hooked in I was informed I would be doing the knee hang (right away!) and did I want to try to the back flip. Right now? This turn? Yep! ...Sure! Why not!
And I did. And it was amazing.
By the end of the first two hour class, I was knee hanging and back flipping and eventually, we even got to attempt two catches-- as in, another professional instructor caught us from our knee hangs and we left the bar we were on and swung in the arms of our catcher. Amazing!!! It was such a high I can't even describe. 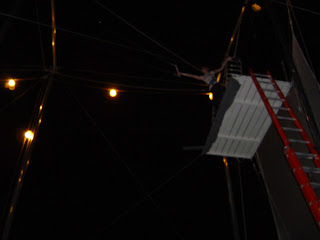 There are only a few downsides... the first of which is, I broke my toe (or severely sprained it; I'm not paying for an x-ray to confirm when the "treatments" for both are identical). On one of my back flips off the bar, I didn't let go exactly when they told me to, so unfortunately I kicked the bar on my way down. Ouch! But you know what? I don't even care!
The second downside to the classes is... I'm addicted! Plain and simple. While this isn't really a downside, my bank account won't be very happy. Upon leaving, they offered all first time students a two for one deal. I'm going back next Tuesday night!
If you think this sounds too intense or too scary for you, think again! Their slogan is, "Forget fear. Worry about the addiction." Wow, they nailed it! Flying trapeze builds your confidence, is an amazing workout, and gives you a sense of freedom that would be hard to find anywhere else. It's a skill, it's a talent, it's an art. I can't wait to go back and learn more all summer long!
Not in Chicago? There are Trapeze School locations in New York (obviously), Boston, Los Angeles, and D.C. What are you waiting for? Sign up NOW. You will in no way regret it, even if you only take one two hour course, you'll be doing things you never imagined you could do!
And very special thanks to my friend Natalie for turning me on to it and taking the photos of me during my flights! 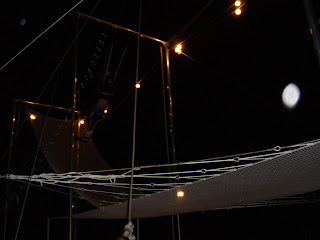