Zombie Thursdays is a weekly feature with guest blogger, Miranda. You can read more about her here.
Hello, everyone! Today's post not only encompasses a zombie, but also fits in with my new segment--
Zombie Thursdays presents-- Miranda Talks About Other Scary Horror Stuff that isn't Necessarily Related to Zombies, but that She Thinks You'll Enjoy Too! (Working Title)
If you were to do a word association game with an Average Joe and said "zombie," chances are they may counter with "Rob." After all, Rob Zombie is fairly synonymous with horror, witches, zombies, Halloween, and all things creepy. Not to mention amazing music! Even if you're not a fan of his music, the man is talented. He's sold millions of albums worldwide and has been nominated for several Grammy awards. Clearly, I am a fan and must admit that his concert was probably one of the best and most fun shows I have ever been to! 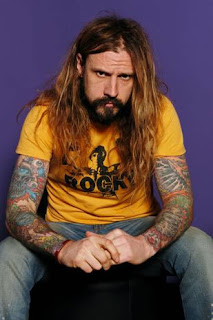 Some cool facts about Rob that you may not know:
1. His birth name was Robert Cummings. He legally changed his name to Rob Zombie in 1996.
2. He dated his girl friend, Sheri Moon, for thirteen years before they were married on Halloween in 2002.
3. He's been quoted as saying the reason he got into horror, etc. is from seeing a dead body in an alley when he was very young.
4. He has been a vegetarian since 1982 after seeing a video in high school about slaughter houses. (*my favorite fact about him!)
5. His younger brother, Spider One, is the frontman to the band Powerman 5000.
Awesome, right? Rob Zombie is pretty famous, so you may be familiar with some of his film work as well-- House of 1000 Corpses, Devil's Rejects, Halloween and Halloween 2. Right now, he's also in the process of filming The Lords of Salem. But one film you probably don't know and haven't seen is the amazing (adult) cartoon The Haunted World of El Superbeasto!
The cartoon didn't have a lot of marketing, and I'm fairly certain it was released straight to DVD. But I highly recommend you check it out! The story is about a former masked wrestler-turned filmmaker/ultra celebrity, El Superbeasto, or just Beasto. Along with his sister, Suzi-X, he works to defeat the evil Dr. Satan and save the voluptuous stripper, Velvet von Black. Along the way they encounter robots, iconic horror movie characters, and NAZI ZOMBIES! There are several musical numbers that are actually by the duo Hard 'n Phirm.
Even though it is a cartoon, again, this is for adults... not children! Unless you are a cool parent and have mature kids who appreciate the finer examples of horror comedy. And really, your kids are probably watching these things anyway, so you may as well watch it with them and answer any questions they may have.
I was going to post a clip of the scene/song "Zombie Nazis," but it had way too many "F" words, so I figured it was best if I didn't. Instead, here is the official trailer, but it is still Rated-R, so be careful to those who are underage or are easily offended by cartoon boobs.
cartoons films music Rob Zombie zombies