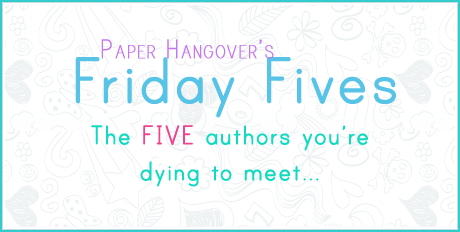 Welcome to another Friday at 'The Pie!' Alicia is still on vacation, so you get to see my thoughts on the Paper Hangover's Friday Fives. This topic is kind of difficult. Fan conventions, book signings, and other events make it easier than ever to meet your favorite authors. Case in point-- I've already met my favorite author of all time, Clive Barker! Of course I would absolutely love meeting him again... but I've already been fortunate enough to spend an entire weekend with him.

Here at 'The Pie,' you probably already know we like to break rules. I'm going to interpret that "authors I'm dying to meet" means that I would have to be dead to meet them. And so... the Five Deceased Authors I Would Die to Meet!

5. Charles Darwin-- This man still sparks tons of controversy, not to mention "founding" a set of pretty funny 'awards.' I don't know what I would ask him, but he would just be cool to meet!

4. Freud-- Whether you believe in the science of psychoanalysis or not, how influential have this man's theories been? Think of how many times a day you have a "Freudian Slip" or say to someone, "you know what Freud would say." His teachings are such a part of our popular culture!

3. Gaston Leroux-- the author of The Phantom of the Opera. Such an interesting story, one of the best examples of a gothic romance. And the tale has become so prolific, I would love to see if he ever imagined the story would spawn so many versions.

2. Dr. Seuss! I'm not even sure if I have to explain this one. Such an icon and prominent in so many children's lives. But did you know he also produced World War II propaganda and also won an Academy Award for Best Documentary Feature? That's pretty amazing!

1. Edward Gorey! I'm just a huge fan. He's for adults and for children. He wrote poems about death, and stories about a sex machine sofa. He was also a recluse and a huge fan of pop culture and music. I'm sure he was a fantastically interesting man, and I'd love to spend a day with him and see into his eccentric life!

There are my picks! Be sure to stop by the Paper Hangover to see the picks of others and to add your own!
authors Dr. Seuss Edward Gorey Friday Fives Paper Hangover