By Alicia Gregoire - September 30, 2011
Fact: Tons of books have been banned or challenged.
Further fact: None of them should, something I talked about on Tuesday.

In preparing for today's post, I went through the ALA site to see what books have been challenged in the last seven years. The amount of stupid is staggering* and has me again asking, "WTF is wrong with you people?"

I won't soapbox today, Lurkdom. Or at least, I promise to try not to. Without further to do, I present... 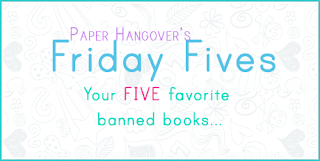 The Harry Potter Series by JK Rowling.
Why challenged/banned: One school district claimed it promoted the Wiccan religion**; many others gripe about warlocks and the occult.
What the challengers are missing out on: Harry Potter is a fantastic, well-thought out series where everything comes to life. Rowling created such a vivid world, it's like a master class by reading it. There's adventure and character growth. Oh hell, most of you read it. Praise it in the comments!

The Giver by Lois Lowry
Why challenged/banned: Suicide, oh no! They don't explain that suicide isn't a solution.
What challengers are missing out on: A teaching moment, for one. They could be doing that explaining for the reader and have an actual discussion. From a reading/writing perspective, people are missing out on the social commentary that Lowry's dystopian society illustrates, Jonas' character development, and some fantastic relationships.

A Wrinkle in Time by Madeleine L'Engle
Why challenged/banned: The occult, among other things, but basically the occult.
What challengers are missing out on: Besides a great story about family, spiritiuality, and science? A Wrinkle in Time is a feel good story where good triumphs evil. L'Engle has this way of covering difficult to digest topics in a way that's accessible for every generation. You will never get tired of her writing.

The Heroin Diaries by Nikki Sixx
Why challenged/banned: Drugs, drugs, drugs, and more drugs.
What challengers are missing out on: A pretty amusing, cautionary tale on heroin addiction. The title does not lie: what's included in between the covers are the actual ramblings of the Motley Crue bassist during his drug-addled years. It's horrifying and entertaining at the same time.

It's Perfectly Normal by Robie H. Harris
Why challenged/banned: Don't tell anyone, but it covers S-E-X.
What challengers are missing out on: A simplistic introduction to puberty and all that entails. I don't understand why people think it's okay not to educate kids on this information. Middle School Alicia was freaked out when hair began to show up in places where hair shouldn't be. If she had read this book, she would've understood that she wasn't a freak***.


* Challenging Merriam Webster's Dictionary because of oral sex is a prime example.
** It doesn't. At all. If you were to ask me what religion the majority of Hogwarts was I'd say some sect of Christianity, specifically Anglican. It's England, people.
*** Coincidentally, College Alicia read this book and felt MUCH BETTER.
_________
Last.fm hit of the day: Oasis by Amanda Palmer (which contains a lot of material that would be banned in books!)
banned books week books favorites Friday Fives