Zombie Thursdays is a weekly feature with guest blogger, Miranda. You can read more about her here.
Zombie Thursday is back! And with a vengeance! I have a few zombie related topics to discuss after my absence, so I hope you will forgive me and that Alicia won't kill me (mostly because I don't want to come back as undead)!
First off, let me apologize for my disappearing act. October is normally my favorite month and the best month ever. This October has been particularly trying for me. Beginning on the 1st, I got sick. Again. Horrible cold, coughing, slight fever, all the icky stuff. For the first time ever, I even called out of work. And unfortunately now, I do not have health insurance, so no doctor. I'm still sick and coughing everyday, almost three weeks later.
Another major thing going on this month was my flying trapeze class! Despite being ill, I still managed to get to class (well, I missed one and had to make it up from being sick). And last Saturday, I performed in my very first trapeze act/show and had an awesome time! Needless to say, I was very stressed and nervous about performing well, which sucked up a lot of my energy in addition to the sickness.
But here I am! So let's get to it!
First zombie related topic, The Walking Dead premier! I won't go into major details because I don't want to give spoilers, but who saw it? I very recently got rid of Comcast and switched back to Dish Network, so I was able to record all of season one and then the premier of season two and did a marathon viewing. I've been hearing a lot of complaints about the season two opener. It was boring, it wasn't the same as the book, etc etc. Well, as far as book consistency, of course not. What book to movie is ever exact? As far as the pacing, I found myself thinking the same thing about this episode as I did about the very first episode on Halloween last year. Yes, the pacing was a bit slow (especially for a ninety minute episode). But I understand why they do this. It is set up. The last episode was back in December and it ended full of action! They needed to reintroduce the characters, remind us what happened and go from there. The show is not a movie. They can't have hordes of zombies attacking every ten minutes-- that would get boring!
On the note of Frank Darabont being fired from the show... only time (or the season) will tell exactly what affect that will have on the series. He was still listed in the opening credits as an Executive Producer, probably because he hadn't been fired yet. So, the first few episodes (or this whole season?) should have his imprint on them. Maybe we won't see the flaws until season three when he is officially gone. Thoughts?
Next up! Something that my dad actually sent me. Not many people really know my dad, but he usually doesn't "get" the zombie stuff and often makes fun of me for doing things like wearing black or reading certain things. But I got an email from him last night (and please keep in mind, I don't think my dad has ever sent me an email. EVER.) and it was an article from msnbc talking about how an architecture firm is hosting a contest to see who can design the most efficient zombie proof house/compound to protect the living from the dead. Zombie lovers were called to design the ultimate anti-zombie fortress for ultimate survival!
There are some pretty cool entries posted and the winner will be decided by votes! Your votes! You can check out all the entries over at the Zombie Safe House voting page. So far, it seems the favorite to win is a complex that is designed to be up in the air with zombie driven turbines down below. I am fond of a birdhouse design... I don't think it would ever work out, but I enjoy the idea!
Go check them out and vote for your favorite! Voting ends on Halloween.
And finally, even though I have been away, I've been representing the zombies with greatness. My trapeze show was Halloween theme, and guess what I flew as? You got it! 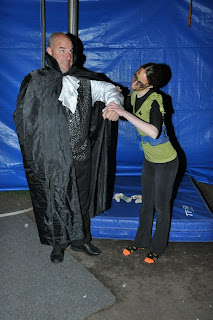