By Alicia Gregoire - February 22, 2012
As a kid, I didn't have an imaginary friend. I had an imaginary GIRAFFE.

This unnamed giraffe would be my scapegoat whenever I did something I shouldn't. (Which honestly, wasn't that often. I was a well-behaved rugrat.) The giraffe got stuck in the back seat of my dad's boat of a car whenever we schlepped to Connecticut to visit the grandparents. Though I don't remember ever talking or playing with the giraffe, I'm sure that happened too.

It shouldn't surprise you then when I say that giraffes are one of my favorite animals to watch at the zoo. They're pretty and seem so peaceful*. They have little horns on their heads and I like the pattern of their coat.

Because of my giraffe love, Chez Gregoire has several giraffa camelopardalis items: the magnet, the keychain, the cat toy, the figurine. Yes, even the stuffed animal(s).

The best giraffe acquisition of late, though, was found in the Target dollar section. Hubby was kind enough to add it to our kitchen art gallery**. 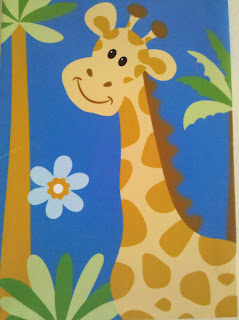 Isn't it great? We have it under our clock so I can see this little guy's smiling face all the time***. The color brightens up the kitchen and it is impossible for me not to cheer up with one look. I'm sure if Child Alicia were to draw her imaginary giraffe, it would look like this guy, but with more of a five year old art skill.

Did you have a non-person imaginary friend? Anyone else out there love art for a buck?


* That opinion gets totally ruined once you see footage of giraffes fighting.
** There is no rhyme or reason to our kitchen art, but we have lots of it.
*** Get it? Clock? Time? (I crack myself up.)
giraffes life ramblings things i like