Zombie Thursdays is a weekly feature with guest blogger, Miranda. You can read more about her here.
Writer's Block. Terrible, horrible writer's block. I've been plagued for weeks. Have you ever had so much stuff going on in your mind that you feel like you creatively have room for no more stuff? That's how I felt all last month. I'm still on a bit of a block. And as someone who loves writing, it really sucks. Since most people who read this blog are writerly types, what do you guys do to get past writer's block and periods of non-creation? This problem is a real first for me. Thank you for your patience with my absence!
I've been thinking of things to write for weeks, and it hasn't been easy. I've had some pretty long and heated Walking Dead debates at work, but unfortunately those topics would be so riddled with spoilers that they're something I couldn't even talk about here on the blog (although contact me privately for some good old fashion debate/show talk).
So today, I took a step back and decided on something that I don't think I've ever put in the spotlight before, not officially. I've spoken a lot about good zombie stories and the awesome special effects artists and directors that bring these horrific characters to life. It's too easy to just think that any type of actor can get some blood and gore and prosthetics put on them and shamble along to make a convincing zombie, but it's so much more than that. It takes an amazing actor to really bring these creatures to life...er, death?
Recently, the actor who portrayed one of the most famous zombies of all time passed away from cancer. Bill Hinzman played the very first zombie seen in the cemetery in the original Night of the Living Dead. He was 75 years old. And while his name may not have stood out amongst the films stars, what an iconic character! There are a lot of memorable scenes from that film, but when asked, I bet most people will recall with absolute clarity the moment the old man in a beat up suit comes walking toward the heroes of the film. At first the audience doesn't know it is a zombie, but then he attacks! I know that moment always frightens me, no matter how many times I've seen it!

Hinzman wasn't originally supposed to be an actor in the film. He was an assistant cameraman and when George Romero needed a zombie in the cemetery, Bill was old enough, thin, and had his own beat up suit (a film producer stated in an interview with Reuters). I have a few friends who were lucky enough to meet Bill Hinzman at some fan conventions and they said he was a very nice man and always happy to sign autographs and take pictures. From such humble beginnings to a horror and pop-culture legend!
A director, designer, or makeup artist can only do so much. At the end of the day, it's the actor's movements that really make or break a character. Kudos to the late Bill Hinzman for accomplishing what so few can do-- create a character that will live on forever in the minds of filmgoers! 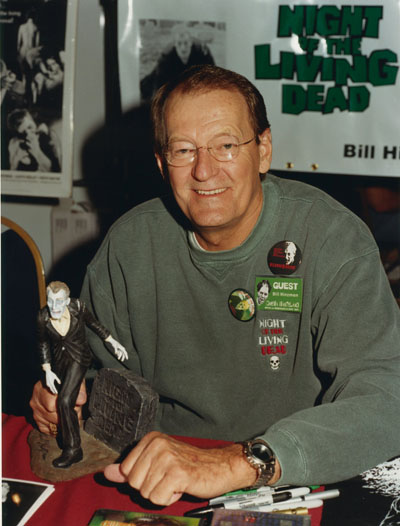