By Alicia Gregoire - February 26, 2018
If you've been around for a while, you've heard me talk about mimes and a book with I refer to as SFLN. If you're curious to know more about it now's the time! What was called Scenes from Last Night is now up on Kindle Scout as SCAVENGER NIGHT.

If you're not familiar with Kindle Scout, it's an initiative through Amazon that empowers the readers to select the books that will be published. Each book has a 30 day window where people can read a tag line, short blurb, and an excerpt. If you like what you read, you can nominate it and share it for others to nominate too. If you get enough nominations, you get a publishing contract and an advance for your book. Pretty sweet, right? Right!

What's SCAVENGER NIGHT about anyway? It sounds like a horror book.
It's definitely not a horror book. It's a YA contemporary with humor and mimes. 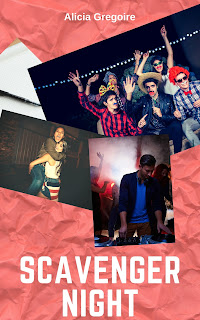 For Leo, winter break always meant tearing it up at Chaplin Point’s annual Christmas scavenger hunt. Not this year. Instead, he’s made plans with three of the geekiest kids in school. Leo can’t imagine a more cringe-worthy night than one involving sweatpants, Netflix, and aliens. Even if his dad finds out and makes good on the military school threat, Leo’s hell-bent on making it to The Point, geeks in tow.

Leo’s plans are bad news for Sully and his annual Dr. Who binge fest. Even if going to The Point means he’s got a shot with the girl of his dreams, he’d still have to face her terrifying bully of a boyfriend.

Going to the party of the year is exactly what Faith needs to ignore her suspicions her boyfriend is lying about his Christmas plans. She wants to win the scavenger hunt and take home the cash prize. Anything to take her mind off confronting him and what comes next.

Concerns about the party plague Natalie. Among them: never being able to escape the nickname “Shorty McTits” and her growing attraction to Leo. When he dares her to team up with him for the scavenger hunt, she ignores the butterflies in her stomach and meets his challenge. But when Leo and Natalie get picked up by the cops, plans change. As the foursome race through a night fueled by beer, mimes, and bullies, they all must choose between who they are and who they want to be.