Zombie Thursdays is a weekly feature with guest blogger, Miranda. You can read more about her here.
**Today's entry contains very adult subject matter**
A couple of nights ago I went out with some friends to eat dinner at Rock Bottom Brewery and then we headed over to a really nice champagne bar for after dinner drinks. I'm not much of a drinker, but decided to partake in several that night. Needless to say, I did end up pretty drunk. I don't think being drunk is a badge of honor, nor do I think it actually increases your level of fun. But I became drunk anyway.
I don't become stupid or sloppy. I don't get mean or yell at people. I don't forget everything I said the night before when I wake up the morning after. I'm pretty much the same Miranda, only more outgoing, and more Twitter happy. So, on Tuesday night, at the height of my drunkeness, what do you suppose I started to talk about at length and in detail? My thesis! Yes, even when trashed on the alcohols, I decided to get scholarly.
I wasn't sure exactly what I was going to write about today, but it wasn't going to be the start of the "Zombie Sex-tacular!" that I have been hinting at and promising for weeks. However, after going on and on about horror and monsters and the attraction to The Other and sex with freaks, all while sipping my champagne cocktail, I decided to start the first part in a series devoted to zombies and sex.
My thesis is quite long, so I won't even try to summarize it here. And I'm not even going to try to get into any of the "whys" behind the phenomenon of sex with the undead. Today, I would just like to give you an example of some zombie culture that is a bit more on the erotic side. **NOTE-- the following will contain spoilers to the movie I'm going to discuss. Also, the subject matter is highly sexual in nature, so if you are under 18, please do not read further. Since this blog doesn't have an adult content notice, and I'm not exactly sure what Blogger's rules are on posting nudity, don't worry, there won't be any pictures or video clips depicting the actual act of zombie sex. However, I do have a European cover that shows partial/suggested nudity. You have been warned!!!** 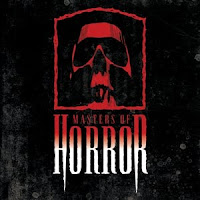 The first piece I am going to share with you is from the Showtime network's Masters of Horror series. The "MoH" are one hour long horror movies, each directed by a legend in the horror genre or written by the masters on the genre. You may recall me mentioning that I recently signed up for a Netflix account that allows me to stream movies instantly on my Wii gaming system. My friend sent me a message suggesting I watch the movie "Haeckel's Tale," a part of the MoH. I had seen a couple of other movies from the series, including an awesome one called "Dance of the Dead," which starred one of my favorite actors, Robert Englund. I knew the series produced some great things, so I was excited to check out "Haeckel's Tale," especially when my friend mentioned it was based on a short story written by my all time favorite author, Clive Barker (check out my personal blog to understand my love for Mr. Barker). The short story originally appeared in the horror anthology, Dark Delicacies. On the next day I had off, I loaded the movie on my Wii and sat down to watch the epic tale!
"Haeckel's Tale" is a period piece (director by John McNaughton) and revolves around a young doctor, Haeckel, who is obsessed with the works and writings of Doctor Frankenstein. He believes that he has also discovered a way to reanimate corpses, but sets a girl's dead body on fire in a botched attempt. He also meets a man claiming to be a necromancer who can bring back the dead through magic. Skeptical, he calls out the Necromancer saying that he uses puppetry and tricks to "reanimate" a dog. Shortly after his encounter with the man, the doctor learns of his father's illness and sets out on foot to visit his father before he dies.
On his first night on the road, he is invited into the home of an older local man and his beautiful young wife, Elise. The woman, who is caring for a child, is distant, agitated, distraught. She stares out the window as if waiting for something or someone. Her husband confesses that she is heartbroken over the loss of her first young husband, and that he (the old man) cannot satisfy her. Soon, the young woman runs out the door and heads towards the local cemetery. Haeckel and the man soon hear her cries of distress and horror. Haeckel wants to run out to rescue the young woman, but her husband advises against it. Ignoring his warnings, Haeckel rushes out to the necropolis and discovers that Elise's cries are not from terror, but are from passion. The Necromancer, whom Haeckel dismissed earlier as a fraud, has brought back the corpse of Elise's first husband and many other zombie suitors who come out of their graves every night to sexually satisfy her. 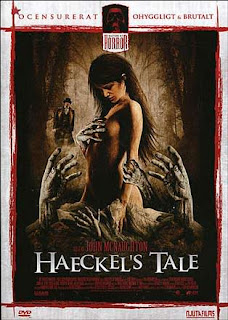 "Haeckel's Tale" is a smart example of the zombie sex subculture, and it does not shock me at all that it originated with Clive Barker. In the movie, it is portrayed as a story within a story-- a cautionary tale about playing God and bringing back loved ones from the beyond. And credit needs to be given to Showtime and the producers of the MoH series; they took a subject that many would consider extremely taboo (necrophilia, zombie sex), and fully embraced it. Know that if you decided to rent this movie or stream it on Netflix, you will see nudity, you will see a young girl having sex with a corpse. You will see other undead beings joining in for a zombie orgy.
The film easily could have gotten distasteful or gross, but, surprisingly, it wasn't. Even with zombies, the sex scenes were far classier than many other film portrayals of the same nature. And the make up and special effects for the reanimated corpses were excellent! Truly some of the best that I've seen, including an amazing zombie baby (you learn that Elise's baby was fathered by the corpse)! 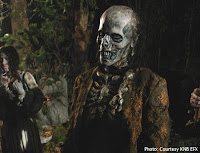 The movie is a great little horror film, and a must see for zombie lovers. If anything, it proves that zombie sex *is* out there, and readily available. And not just in a cheesy B-movie/porn-esque way. The Masters of Horror series is widely revered and loved by all types of horror fans. Do yourself a favor and check out "Haeckel's Tale" and any of the other films from the series! Originally, the movies were scheduled to end instant streaming on June 1, but it appears as if the contract has been extended. So, go watch it right now! Just remember... it is EXTREME NSFW! ("Not Safe for Work"... don't feel bad, I had to have someone explain it to me, too.)
See you next week!
Clive Barker movies sex thesis zombies