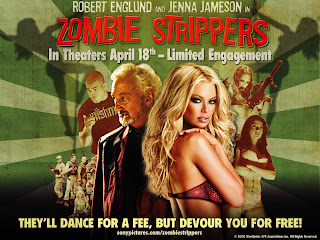 Zombie Strippers! succeeds at a lot of things, but also fails at a lot. The director and writer Jay Lee appeared to be making a sort of political satire, but this is where the biggest failure occurred. The film is supposed to be based on the Ionesco play "Rhinoceros" (the club in the film is called "Rhinos") which comes out of the Theatre of the Absurd. I can definitely see how this film is supposed to an Absurdist piece. However, I don't feel as if the type of viewer who would see this film would get that. I'm not saying this to criticize the average viewer. Honestly, at first I even had trouble seeing it as a type of Theatre of the Absurd script. I get now what the director was trying to do, but I feel ultimately he failed. The real message about conformity, mob mentality, and defiance (to name a few themes that are present in Ionesco's work which criticized blind conformity to Communist rule and Nazism) is lost behind boobs and lap dances.
The movie starts off by explaining that it takes place in the near future. Through manipulating the Constitution and the government, Bush has entered his fourth term as President and has outlawed public nudity. Plus, not only is the country still at war with Iraq and Afghanistan, we are now at war with many other countries. Casualties are high and a biotech company is developing a new virus that will reanimate fallen soldiers so that they keep fighting. Typical, typical... I'm sure you can see where this is going.
Obviously, the virus gets out through an infected soldier and he runs into an underground strip club. It's an extremely popular (and illegal) place. But at some point, the infected zombie soldier rips out the throat of the most popular dancer, Jenna Jameson's character, Kat. And of course, Kat turns into a zombie. It's oddly explained earlier that for some reason if the host body has two X chromosomes (females), the virus doesn't completely impair mental ability. Kat is a zombie and she still hungers for human flesh, but by golly! She still wants to strip. After a couple other girls are infected, it is obvious that the club goers are only interested in the undead dancers and boo the living girls off the pole. This preference makes the living girls struggle with their own internal desires and fears in succumbing to the new zombie stripping fad. Should they or shouldn't they become the undead? (Ah ha! See, the struggle to conform!)
A huge success is Jenna Jameson's first striptease as a zombie. Her outfit is amazing (and was apparently custom made for her) and it's a shame that it doesn't stay on for long. And while I don't find her particularly attractive (her fake boobs are just a bit too big and, well, fake looking for my tastes), she is one athletic woman. I was pretty jealous of her flexibility on the pole and it made me want to start working out more! Another awesome zombie stripper is played by musician Roxy Saint. She plays the token goth stripper, Lilith, who eventually turns into one bad ass zombie. Her first zombie striptease is both disturbing and hot. And her zombie makeup and 'look' that they designed for her is by far the best in the film. She also has the best kill in the whole movie where she rips a man's head in two by pulling open his jaws. Another high point in the film is a zombie stripper fight to find out who is the star of the club. It ends epicly when Kat shoots billiard balls out of her vagina. I am not lying about this. 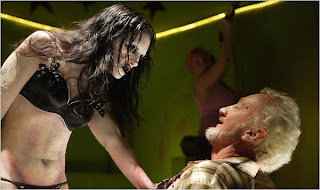 And of course, another high point is Robert Englund. As a classically trained actor, he obviously gives the best performance in the movie. He plays the club owner Ian Essko (ha ha, get it? Ian Essko?). Ian enjoys his success in the illegal stripping business but is clearly disgusted by the girls, all of who he thinks will give him herpes by just touching him. When he realizes that the zombie girls are the new big draw, he decides to cash in on the fad. So what if they eat and kill a few of his patrons? He just locks up the newly made zombie men down in a cage in the basement. Also, one of the best satirical jokes in the film revolves around Englund's character. A jab is made at the NRA during the final zombie battle. Ian and a few other employees load up on Ian's gun collection... guns he doesn't know how to use. He's a card carrying NRA member and as he says, he has the right to own them... he doesn't have to know how to properly use them. (More statements on mob mentality and the need to join and do as the group does!)
It was somewhat frustrating that at times this film was incredibly clever and I thought it was going somewhere, but then it would fall flat. A lot of the dialogue and characters fit that of an Absurdist piece-- a script filled with clichés and bad jokes, archetypal characters and stereotypes (like our friend the token goth girl). But it also just seemed like a poorly written and badly acted film because it was a poorly written film and badly acted film, as if it was an Absurdist piece by accident and not done purposely. Even the makeup and special effects were all over the place. This was a very low budget film (I believe it was made on only a million dollars), but in some scenes the makeup and gore were amazing! But in others, the gun blasts and headshots looked like something that I would do in iMovie (and this is not a compliment).
Absurdist tragicomedy questions aside, the most crucial element of the film that I am interested in is the fact that in becoming zombies, the strippers are highly more desirable. As mentioned above, the male patrons only want the zombies. During Kat's first undead dance, the men look on in silence. The dance is raw, primal, lusty. There's more of an edge to it than standard stripping. Plus, she's covered in blood and the entire club saw her dead minutes before. The men don't know what to think. But as soon as the dance is over, there's a moment of silence and then they erupt in cheers. Which brings us to the question of "why?" Why are zombies so sexy? It may just be the strangest sexual dichotomy ever. But believe me, it exists in many places. This filmmaker could have very easily made a modern 'Rhinoceros' by using zombies without the stripper element. In fact, it would have made more sense to leave out the strippers and just set the zombies in a small town where people started changing and wanted to become zombies. So why strippers? What is so fascinating about zombies as sex objects? I definitely have a theory... a thesis, if you will, on this exact subject. But I realize sixty pages of psychophysiological and pyschoanalytical research is way too much to post in one blog. 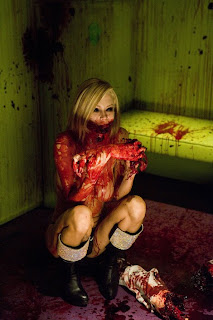 On that note, share your thoughts and join me next week for part two of the Robert Englund Zombie Sex-tacular!
Jenna Jameson movies Robert Englund sex stripping thesis zombies