Zombie Thursdays is a weekly feature with guest blogger, Miranda. You can read more about her here.
Just like any good zombie, you really can't keep something dead for long. Thus, we're revisiting a topic I have posted about before-- the Hello Kitty Zombie. You may recall from my previous Zombie Kitty post that I was in the process of moving and wanted to make a small room in my apartment a girly Hello Kitty room. Well, ironically, I have just moved again! I'm not sure if the plan remains to turn a room into a Sanrio room... we'll see.
In my last HK post, I showed pictures of fan-art type of things-- zombie kitty tattoos, a cake, artwork, etc. None of it officially licensed or anything. All that has now changed! Sanrio has produced a limited line of Hello Kitty Zombie products (along with some of HK's closest friends). It seems most of these products are sold at (surprise, surprise) Hot Topic stores. Nonetheless, they are really cute. And kudos to Sanrio for capitalizing on something fans were already doing. Did you know Hot Topic sends out employees to basically spy on popular youth culture, to take what people are already creating and styles they're wearing, then they mass produce it into cheap clothing and accessories? True story... but that's a blog for another day. In the meantime, here are some officially licensed Sanrio zombie products, including a picture of a necklace set a friend got me for Christmas. 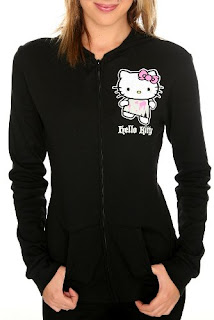 Zombie Kitty hoodie. The back has a scene with zombie Sanrio characters. 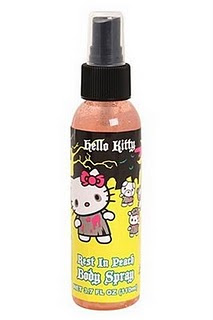 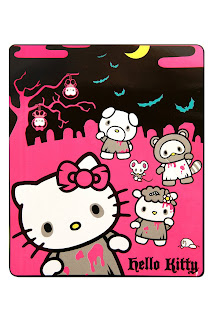 Zombie Kitty and all her friends-- throw blanket
Don't forget... sign up for our "Race to 150" contest! We're less than 30 people away from hitting our goal and putting a stop to entries. Lots of prizes up for grabs!!
Hello Kitty Hot Topic Sanrio zombies