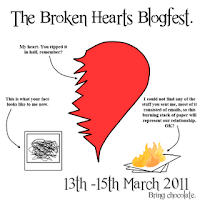 Today is the last day of Dawn Embers' Broken Hearts Blogfest. So if you're coming from there, hello, and why don't you enter a contest while you're here? If you say you're from this blogfest, you'll get an extra entry.

What is that?
I'll let Dawn explain:
"... the basic idea is to write about a heart breaking or one that is already broken. Show us the wretched emotions, the anger, depression, fear, whatever happens after the happy honeymooon lovey-dove V-day stuff is over and all that is left is a broken heart."

This blogfest has been on my radar for a while, but wasn't sure if I'd enter it. I'm twitchy about sharing excerpts from WIPs, but I'm trying to get better at it. Feedback is a good thing to have, after all.

The below is a bit from my co-authored yet-to-be-titled WIP. The MC, Laurel, is seeing her ex-boyfriend for the first time in almost two years. I hope you enjoy it.

As we neared the stage, I could see more of Aidan than just his head: the black shirt was stretched across his back and shoulders, but bunched around a silver studded belt that had no other function than fashion accessory.
I walked to where he stood, ducking and weaving through the tightened mass of bodies, until I was an arm’s length away. I froze. If the disappointment was still etched on his face when I looked at him, I wouldn’t know what to say. It was bad enough that his accusation still rang in my ears.
“You’re in love with him,” he had said about Brody.
It wasn’t true. The tour was a commitment that I wasn’t ready for at the time. Like living together. And marriage. No matter how many times I had tried to explain myself, Aidan would only believe that Brody had somehow won my affections when he wasn’t looking.
For all I knew, Aidan still believed that.
I took the final step forward and touched his shoulder. He turned around and gave me a smile so authentic that it eradicated all thoughts of misgivings and heartbreaks. He wrapped his arms around my waist and held me close.
“Welcome home,” I said in his ear.
“Best homecoming ever.” He kissed my cheek. “Want to go out back?”
“That’s where I was heading before I saw you.”
“Come on.” He took my hand in his and pulled me away from the stage. “What do you think of the band?”
“Guys shouldn’t sound like girls, but other than that I guess they’re okay.”
“I think they’re pretty good. Their following’s decent and they were cool enough to share a bus with us; I’d tour with them again.”
He wrapped his arms around my waist again, pulling me close. I left my hands on his arms and relished the closeness. “You know, I thought this was going to be weird, seeing you after so long.”
“Me too; it’s like nothing happened.” My smile faltered at the grave expression stamped across his features. “What’s wrong?”
“I made a big mistake, Laur.”
“We can fix it.” I met his lips with mine, tentative at first until he kissed me back. The thought of talking no longer seemed important.
“Not here,” he said, finally breaking away. “Too many people.”
I tried to think of where we could go that was nearby, but couldn’t focus past the nearness of his body, the feel of his skin under my fingers, or his lips moving along my throat. “Where?”
We decided at the same time. “Men’s room.”
He took hold of my hand again and led me back through the main floor of the Viper Club. There were more people inside now, making it difficult to move through the throng. Decay of Rumination was still on stage, but I was unsure how much longer before their set ended.
Aidan stopped in front of the bathroom door. “Wait here.” He kissed my forehead and disappeared. He returned seconds later and pulled me into the men’s room and towards one of the stalls.
It had been so long since I’d had the whole of him pressed against me that I could care less about the dinginess of the room or the dirty limerick on the wall across from me. All that mattered was that we were together and that the harrowing emptiness his absence had caused was beginning to fade away.
Thank God I decided on the skirt.
“Wait.” The word came out of his mouth in a hoarse whisper that made me want to do anything but. Aidan wrapped a hand around my wrist, stopping me from pushing his pants to the floor. “I can’t do this, Laurel.”
I nipped at his lower lip. “Performance anxiety?”
“Worse.” He dropped his head onto my shoulder. “I’m engaged.”
I closed my eyes. I could feel his jagged breathing against the sensitive spot on my neck and his hands against my skin. The thumb of his left hand was tracing small zeros along my ribs while he uttered useless apologies. His thumb circled around twenty-six times, and his one apology was reiterated half that.
There were questions I wanted to ask, but I was afraid of the answers. He pulled away and bent down to retrieve our clothes from the tiled floor. Watching the way his muscles stretched and contracted, it didn’t seem fair that some other woman would have the pleasure of watching him move or delight in his touch. That I would never be able to have that with him again.
“Have you been working out?” I asked for no other reason than to distract myself from the hole that was reforming just as soon as it had begun to heal.

Thanks for stopping by! And if you have a chance, stop by Pam & Quita's blog where they are critiquing first lines all week long!

_____
Last.fm hit of the day: Nowhere by Murderdolls
blogfest excerpts