Zombies Face Off in a Dance of the Dead

Zombie Thursdays is a weekly feature with guest blogger, Miranda. You can read more about her here.
I'm not a fan of reality television shows. I find them to be completely unrealistic, even the "competition" shows. Producers constantly set the outcome of who stays and who goes. Let's face it-- you can't send home the bitch on the show in the first episode because then there would be no drama. No drama, no viewers, no ratings. This fact always bothers me. In a competition to find the next best *whatever,* the producers are pulling strings for ratings, not real talent. Ever wonder how Jeffery managed to win his season of Project Runway after consistently being in the bottom two every week for the first half of the season? He was an asshole, so they kept him around.
With all this hatred in mind, I decided to give a new reality show a chance, but only because I'm highly interested in the subject matter. The show is on Syfy (or whatever they call themselves these days to sound cooler) and it is known as Face Off. This might get a chuckle from those who remember a completely implausible movie of the same name starring John Travolta and Nick Cage. 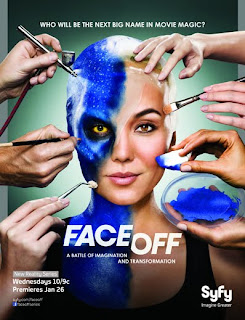 The competition on Face Off is simple-- twelve of the "best" budding make up and special effects artists compete each week in challenges designed to showcase and stretch their abilities in design, fabrication, and execution. Often they are only given two days to completely sculpt, mold, paint, and apply a variety of latex, foam, and silicone pieces to transform their models into a variety of creatures and people. Having dabbled in some molding and latex work myself, I can say that this is no easy task. It takes time and real talent, so I'm always very impressed when people can fabricate such awesome things in a very short time. Some of the challenges have been creating aliens, horror villains, and a gender swap episode. And since zombies are so "in" these days and are heavily present in films and now television (Walking Dead season one is available now on DVD and Blu-ray), no special effects show would be complete without a zombie episode!
The challenge from last week's episode was to create an original zombie, but half way into day one they were thrown a (not so major) curve ball-- the zombie make up had to hold up during a dance number, "Thriller" style. (The actual dance was done to the song "Zombie" by Natalia Kills) 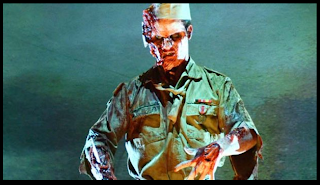 All the contestants came up with some amazing designs that translated really well on the models. My favorite was a World War II zombie who had glass and shrapnel sticking out of his face and arms. Of course, the person who should have gone home did not because she's the contestant everyone on the show hates. The judges kept her because, although her implementation was horrible, "she had the most creative idea." I'm sorry, anyone can come up with a cool idea. I thought the purpose of the show was to create and present the ideas? (See why I hate reality television?)
All the zombies held up during the dance number, which was actually pretty cool! The show is getting down to the final people, but I still recommend checking it out for all the other cool things they create. I've really enjoyed watching it and I've tried to ignore all the stupid downfalls of reality shows. But because of the zombie episode, if that's how the producers keep fixing it, I probably won't make it watching another season (if it gets the greenlight for a second one). It airs Wednesday nights on Syfy channel and is also available on Hulu and On Demand on Comcast. Below is the video from the dance number. It was difficult to find a version to embed, so the quality is a bit wonky and there's an ad that pops up randomly... but hopefully you can still enjoy!
And don't forget to check out the "Race to 150" contest! It's easy to enter and there are lots of prizes up for grabs, including a Zombie Survival Kit from yours truly!
competitions Face Off make up reality television Reviews special effects zombies