By Alicia Gregoire - July 01, 2011
It's Friday and in under six hours I'll be having a fantastic long weekend. Until then, you're stuck with me and my five favorite cliches. 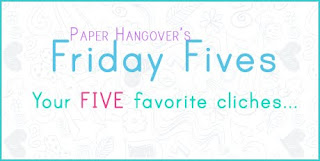 When the general public thinks cliche, chances are they'll think a catch phrase. When I think cliche, I think things in writing. Let's count them down:

But my all-time favorite cliche?

Head over to Paper Hangover to see what the others are saying! And don't forget to enter my Fauxmance contenst!