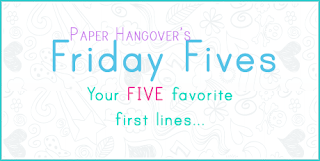 Due to last week's blogging hiatus (not to mention a general case of head-up-the-ass), I didn't prepare for today's Friday Fives. Thank god for online book previews. Below you'll find some of my favorite beginnings*.

"Are you still mad?"
Alec, leaning against the wall of the elevator, glared across the small space at Jace. "I'm not mad."


Why I Like It: I just reread the first three books in The Mortal Instruments so this scene is fresh in my mind. After spending one book already with Jace, Alec, and crew, you have a good idea of their personalities which makes the scene more fun.

The man in black fled across the desert, and the gunslinger followed.


Why I Like It: I've blogged about this once before, but this sentence restored my faith in Stephen King. That withstanding, it's pretty intriguing. Why is this guy being followed across the desert?


"Wait--did you--you just yawned!" The vampire's arms, raised over his head in the classic Dracula pose, dropped to his sides.


What I Liked About It: Paranormalcy was one of my favorites of 2010. Starting off with being bored by a vampire clues us in to this being not your average UF.

Here is everything I know about France: Madeleine and Amelie and Moulin Rouge.


What I Liked About It: It's the beginning of a very solid paragraph that conveys voice and humor, and the rest of the sentences go on in the same vein, letting us know what the narrator knows. This might be my most favorite paragraph ever written.


What I Liked About It: The length. It's stupidly long and if any of us did this today, we'd probably get spanked. However, Dickens does a good job of showing us that nothing really changes.

Have some great first lines you'd like to share? Go over to Paper Hangover and play along.


* Disclaimer: The opinions of yours truly are subject to change with no notice.
_______
Last.fm hit of the day: Asoulum by Lunatic Soul
books Dark Tower reference favorites first lines Friday Fives