Each week as I plan out what I’m going to write about for Zombie Thursday, my mind is usually stuck on one main idea or theme. I have this outline in my head, then I start writing it in my head. I also decide what kind of pictures I need to find or what kind of photos I need to take. All of this mashes around inside of my brain and eventually I sit down and write, write, write.

A couple of weeks ago I had a pretty solid idea on a cool blog to write, but I had this incredibly random zombie dream and at the last minute decided to write about that instead. The same idea that I bumped from that week was supposed to make an appearance today. I’m sure you can guess where this is going...

Yes, I am bumping it again. When it finally does get published on Zombie Thursdays, I’m hoping you all will think it is a fun one! I think it is going to be good. But once again, it seems as if the fates are directing me to write on something else. 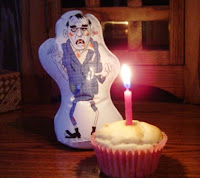 In the ‘I Dream of Zombie’ blog, I spoke about survival or the will to live. As much as zombie films are about death and being killed and eaten, they are also about celebrating life, being grateful to be alive. Today I am celebrating life-- my life! Today is my birthday; I’m turning 26 years old.

I believe in a lot of things, but the one thing I don’t believe in is coincidence. I don’t think that anything is just ‘random.’ I feel that things happen for a reason, and that events and occurrences that happen in our lives are all interwoven. They have meaning and purpose. Connection, not coincidence. On that note, as I feel like this past year has been one of the better years of my life, it doesn’t come as any shock that my birthday is falling on a Thursday this year, the day I get to write a weekly blog about something I love so much. The connection here reminds me of when I was younger and a birthday fell on a Saturday. My favorite Saturday morning cartoon at that time was “Tales from the Cryptkeeper,” an animated version of the live action adult show, only made for kids! On that particular birthday, I wanted so badly for them to play my favorite episode, a fractured fairy tale version of Sleeping Beauty that also had vampires in it (episode 5..which, uncoincidently, happens to be my favorite number). And you know what? That is the episode they aired.

So, in honor of this day of births and me and Mr. Romero, here are some cool facts about the both of us.

1. The first zombie movie I saw as a child was the 1990 remake of Night of the Living Dead, obviously based on Romero’s original 1968 film; he was an executive producer on the remake.

2. Silence of the Lambs is one of my all time favorite films. Without fail, if I catch it playing on television, no matter what part of the movie it is, no matter how recently I have watched it, I will sit and watch the whole thing again. George Romero has a cameo appearance in the film!

3. One of Romero’s very first jobs was directing little shorts seen on the children’s television show Mister Rogers' Neighborhood. I watched that show everyday when I was growing up.

4. In 2009, a documentary called Autopsy of the Dead was released. It contains interviews with many of the original cast and crew members from Night of the Living Dead. Two friends and coworkers of mine worked on that documentary!

5. Night of the Living Dead was listed on the National Film Registry of the Library of Congress. This one has nothing to do with me, but it is a huge honor (especially for a low budget, independent horror film) and I wanted to include that fact here.

6. George Romero will be attending the HorrorHound Convention this March in Indy; I will also be attending and staffing! Yes... I am hoping there will be pictures to share in a future Zombie Thursday! Also in attendance will be Joe Bob Briggs who hosted a horror movie every weekend on TNT... it was with this show that I first saw the remake of Night of the Living Dead.

I hope everyone is having an amazing day, I know I am! If you have a moment, jump on over to FEARnet.com-- they have the entire day devoted to all things ZOMBIE! And if you use the Twitter thing... don’t forget to #tweetlikeazombie!