By Alicia Gregoire - November 18, 2009
I'm very excited to announce a new feature on this blog... Zombie Thursdays. Because, let's be honest: who doesn't like zombies? 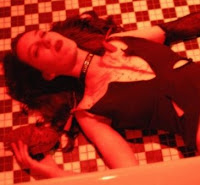 "Who is this irresistible creature who has an insatiable love for the dead?"

Miranda's undead obsession began at the age of 8 when she first became fixated on two films, Bram Stoker's Dracula and Buffy the Vampire Slayer, both released in 1992. Rather than identify with the heroines of the films, she developed unhealthy crushes on the vampires, a horrific sexual attraction that haunts her even in adulthood. When Night of the Living Dead first entered her life in grade school, she was soon getting her friends to play "Zombie Tag" and pretending that the tops of slides were attics to hide in. A true necro-mantic, the things that make her "squee" are zombies, parasitic twins, and guy-liner. Miranda is also heavily involved with shadow casting Repo! the Genetic Opera (a gothic rock opera) in Chicago, IL with her performance troupe The 90 Day Delinquents; she shadows the role of Amber Sweet. Find her and the 90DD on Facebook at www.facebook.com/90daydelinquents!

So, stay tuned tomorrow for Miranda's first guest entry discussing zombie love. I, for one, am very excited about this. Miranda's an awesome, funny, and intelligent person, so her insights on zombiedom will be great. Please pop a note in the comment box to say hello!
blogging features miranda zombies