The Stages of Loss According to Lucky 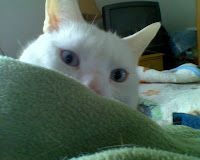 This is Lucky. We call him Bud. You'll see reference to him on Twitter as The White One.

This is one of my most favorite pictures of him taken with my crappy little camera phone.

It wouldn't be so far a stretch to say "adorable." (Provided you like cats. I acknowledge that there are anti-cat people out there, but you need your head examined.)

Lucky is a cat best not to be left to his own devices because he does things like break shelving units, get his head stuck in tissue boxes, or set fire to his tail. Lucky is a cat who's catnip of choice is attention. Negative attention to be exact. We don't like it, but after two and half years with the mammoth beast, we're used to it. Hubby is more patient with the shenanigans than me.

Want to know why? 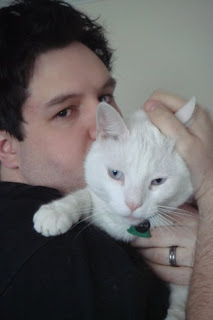 Stage One: Defiance.
Lucky lounges across whatever Hubby is using for luggage this time. It will be open and there will undoubtedly be an article of black clothing. Lucky loves these best.

Stage Two: Guilt-trip Via Cuteness.
This sometimes coincides with Stage One, but usually stands on its own. Lucky will become extra playful around this time, doing things he knows we like. (Tail chasing on the scratching post is always a good bet.)

Stage Three: Sneak Attack.
Lucky winds himself up around Hubby's black pants and blocks the door. This never works and usually ends with "get the cat" and Hubby making a final pass with the lint brush.

Stage Four: Emo Cat Begins.
This is the part Hubby does not see; it's for me only. The emo cat stage has multiple steps including - but not limited to:
Stage Five: Anger.
Anger comes when Hubby is gone for longer than 24 hours. Lucky showcases his displeasure using various techniques, the most frequent being "The Salt Shaker Does Not Belong There" and "What Do You Mean The TV Isn't A Scratching Post" maneuvers. These are quickly paired up with "I Hate You, Toilet Paper" and "Cheyenne, You MUST Accept My Love NOW."

Stage Six: Love.
This is the final stage. It happens after Lucky spends a long miserable night in timeout so I can have a full night sleep. He will do things like curl up on feet or under blankets during this stage and rumble uncontrollably. If something soft is nearby, he'll pretend it's Mom.

In Stage Six, all is previously forgiven by me. Lucky and I will reach an impasse until Hubby comes home and we repeat the process for the next business trip.

Hubby left early this morning for a two day trip. As of 6 this morning, we have already progressed to Stage 4.1. In the next month, Hubby will be gone for about a week and a half. Any takers on how many times the cat goes in time out?
cats hubby The White One