Zombie Thursday: The Power Of Voodoo

By Alicia Gregoire - December 10, 2009
Zombie Thursdays is a weekly feature with guest blogger, Miranda. You can read more about her here.

It has been three weeks now, and hopefully it comes as no shock or surprise that I love zombies. I literally think and talk about zombies everyday. I always have some sort of zombie reference to make, a zombie joke, and I even wear zombie clothing. A lot of people don’t understand my fascination. I’m not even sure I understand my fascination. But one thing that always seems to either intrigue or bother people who know me is... do I really think zombies are real? 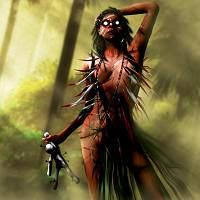 So do I really, truly believe in zombies? Well, I will leave you dear readers to keep guessing. In the meantime, let’s discuss a more scientific existence of zombies, mainly the voodoo zombie.

Prior to 1968’s Night of the Living Dead, films that contained zombies did not have the flesh eating, reanimated corpses we know and love. They were of a different variety, namely dead people who had been brought to life as slaves for a voodoo sorcerer. Probably the most famous of these films, often considered the first full length zombie film, is 1932’s White Zombie starring Bela Lugosi of Dracula fame. The film’s plot, set in Haiti where voodoo is practiced heavily, revolves around a newlywed couple, a jealous admirer, and a voodoo sorcerer. Just as she is wed, poor Madeleine starts to transform into a zombie after she is given a potion made by Lugosi’s voodoo sorcerer character. She dies and is resurrected as his zombie slave along with all the other mindless zombies who run Lugosi’s sugar mill. The film did not receive positive reviews when it was first released. A major criticism was the poor acting and the over the top story line. Zombies... over the top?!? Even though most critics in America were not all that accepting of the film, one overseas group was... the National Socialist Party! Yes, White Zombie was one of the only American horror films to get the Nazi seal of approval.

Personally, I find (and so do the Nazis) the idea of a voodoo zombie slave intriguing! If there are going to be hordes of zombies, I would love to be the one in charge and pulling the strings. So where do these zombies come from? Is there any truth or historical evidence to zombie slave claims? Surprisingly, yes!

Voodoo is a religion originating in Haiti that combines the beliefs of West Africans and Roman Catholicism (yep! Christianity plays a role in voodoo). It is based upon the belief in one supreme god, Bondye, and lesser deities, Loa (or Lwa). Practitioners of voodoo believe that Bondye is not at all different from Abraham’s God, but that he is unreachable by humans. Therefore, their energies are focused on praying to the Loa, which are often compared the the various saints in Christianity.

The area of voodoo where zombies come from is not very widely practiced. A lot of myth and superstition surrounds this area of ‘black magic’ voodoo and has been sensationalized by film and television. Typically a sorcerer known as a Bokor is responsible for creating a zombie through the use of several potions and toxins.

The main toxin that has been attributed to zombification is tetrodotoxin. It is true that tetrodotoxin (also called TTX) is the poison found in pufferfish. However, this is not its only source. TTX is also found in certain newts, toads, angelfish, and other sea creatures. Doses of TTX will cause the body’s nervous system, organs, and muscle function to slow down to such a state that it appears as if a person is dead. The wrong amount of TTX will truly kill a person (to put it in perspective, tetrodotoxin is one hundred times more poisonous than cyanide). A bokor will poison someone with TTX to the point that they appear dead to doctors and loved ones. Later, the zombie victim will be given a second poison coming from a Datura plant.

The genus Datura belongs to the same family of plants that contain other “witches’ weeds” that you are probably familiar with, such as deadly night shade or mandrake. Common names for Datura plants are Devil’s Weed, Hell’s Bells, and Thorn Apple. These plants also contain toxins that act as hallucinogens. Side effects can make a person unable to distinguish between fantasy and reality, can cause severe violent behavior, and causes amnesia, all of which give a person zombie-like qualities. Reports from zombies who have broken free from their bokors have admitted to memory loss; during their enslavement, they were unable to remember who they were and could not even recognize loved ones. They had no will of their own and could only do what was told to them. People who have reported seeing voodoo zombies claim that their eyes were blank and unfocused, and their faces were devoid of any expression.

With a combination of these two poisons, it is plausible to see how a zombie could be created in the voodoo practice.

Another interesting side note to this “zombie drug” is the Family to which it belongs. If you are a fan of Max Brooks’ The Zombie Survival Guide (and really, who isn’t?), then you may remember that Mr. Brooks claims real zombies are victims of the Solanum Virus. It seems as if Mr. Brooks has done his homework as well. Although in the Survival Guide he claims the origins of the Solanum Virus have never been found or detected anywhere in nature, it is almost certain he came up with this virus based on the voodoo zombie drug. The family of plants used for this toxin is from the Solanaceae family. And the term Solanaceae comes from the Latin word (you guessed it) Solanum meaning “the nightshade plant.”

Could there be truth to voodoo zombies? Many historical accounts exist of those claiming they were under a bokor’s spell and family members insist that those they buried as dead have returned to them years later with no memory of what happened to them. Many scientists dismiss these claims, yet they are still there. Could the Solanum Virus be real, the result of a mutated plant infecting a human?

Zombies may be closer than you think.... I’ll let you be the judge.
miranda zombies