By Alicia Gregoire - January 08, 2010
On Wednesday, number 1 agent crush, Nathan Bransford, blogged asking us about favorite books and worst outfit/ style as a teenager. Over 300 people shared their books and their now-horrifying, once-cool hairstyle and/ or outfit. I'll admit right now to reading every single comment and clicking through to the pictures. This got me a little nostalgic.

So last night instead of working on FALLING TO NORMAL, I poured over old pictures to scan and upload. (Old = 1993 - 2004ish.) I think I might do a couple of posts over the next few weeks showcasing some of them, but right now it's all about the bad teen hair and fashion sense.

For your viewing horror, I present the three worst on-profane pictures of me from the teen years. 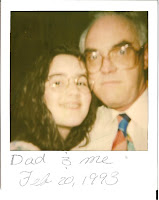 I hated my straight hair and wanted it curly. Don't mock; it was a trend. Back then, I wanted to be trendy. We couldn't afford for me to go get my hair permed so my mother bought a DIY kit. You can see the awesome end result here.

Complete with huge glasses and a trace of either braces or retainer, I think I'm the standard early 90's nerd/geek/whatever-the-technical-term-is.

Lou looks stellar as always. He has less hair now and smaller glasses, but the expression has not changed.

My hair and fashion sense improved the following year (though my hair has never survived the DIY perm.) I still had the impossibly large glasses. (Something that haunted me until I was allowed contacts senior year.)

My theme for 10th grade was everything had to be rolled. Jeans? Rolled. T-shirt sleeves? Rolled. Denim shorts? Yes, sadly they were even rolled. 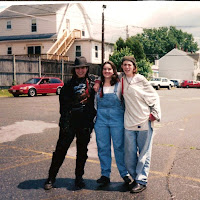 Then there were the overalls. If you're built like me, you shouldn't be wearing painter's pants. I loved these and wore them through sophomore year of college.

You can see all of my public school awkwardness on Facebook.
blast from the past dating myself facebook