I Dream of Zombie

I often watch horror films and think, what would it be like to really be in that situation? I have this thought more often when I watch zombie films. Most horror movies, however terrible and cheesy they are, focus on survival. Survival of the Final Girl, survival for the monsters/villains, and often even the survival of the franchise, because let’s face it-- is it really worth watching if there aren’t eight sequels and at least a remake/re-imagining or two?

I always wonder what it would be like, what would I do? How would I fight to survive? Would I be able to get myself safely out of a horrific situation and lead a group of others to safety as well? To date, I have luckily never found myself in a situation with a psycho killer, supernatural or human (unless you count my creepy “neighbor,” but that’s a long story and not really zombie related). And sadly, I have not yet found myself in a situation where I have battled zombies. It will happen. I’m patiently waiting. But until then, the best I can do is dream about them.

Some people claim to be able to control their dreams; I am not one of those people. It would be awesome if I could, but the best I can do is have my dreams highly influenced by outside forces. I had a completely different Zombie Blog planned for today, but I had the coolest, and maybe weirdest, dream ever and I felt the need to share! From now on consider my words to be talking about my dream... I don’t want to start a panic!

I was back at college, which is horrifying enough. It was the beginning of the semester, so classes were starting up at their usual slow and boring pace for the first week or so. I didn’t know my professors yet, or any classmates. It was right after a class had ended and everyone was rushing out to make it to their next room when it happened. For some reason the school had an intercom system (my real college did not), and they came on making an announcement that several students had been turned into zombies and were terrorizing the campus. All students were to make their way to the Commons (that would be the Boston Commons) to gather and get further instructions.

I found myself in a small group with several professors... professors who also happened to be JEDIS. Yes, they could use Jedi powers. They told our group that everything would be okay and that their Jedi powers would be enough to kill and keep the zombies away. I was outraged! You can only kill a zombie by destroying the brain. And in my dream, using a Force Push was NOT enough to disable our foes. I tried to explain that we needed to find some weapons or else just beat them off with our hands (which in real life is NOT a safe method of attacking a zombie... but it was a dream. Nothing really makes sense).

Just then two zombies popped up and attacked us! The professors proceeded to use their powers with no results, and I urged the other students to follow me! We made our way through the enormous and complex building which also turned out to look like an indoor wildlife museum with dead stuffed animals, and finally made it to the Commons. Here the dream gets a bit boring. The president of the college began to speak about how to remain safe and everyone booed her. (In real life, the president of my college was a joke who received two separate votes of no confidence and still refused to resign, so I assume that was the cause to boo her in the dream.) Some other people were not only Jedis, but were also wizards and were using wingardium leviosa to elevate the zombies so they couldn’t attack. 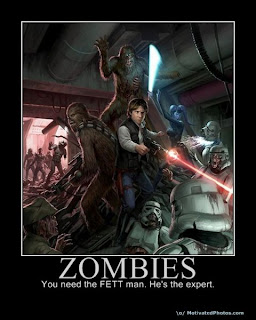 It was a very odd dream, but I woke up with a smile on my face. It was almost like being in a futuristic holographic training program where you know the danger isn’t real, but you still get the adrenaline from the thought that it could be. As I cannot control my dreams, I blame this one on the influence of watching Community on NBC, seeing that Star Wars was playing an Episode I-III marathon on television, rewatching HP’s 3-6, and, of course, my constant love of zombies!

Have any of you found yourself in the middle of a zombie horde only to wake up and realize that it was just a test to prepare you for the inevitable apocalypse? The day is coming; I’ll take all the zombie dreams I can get!
dreams miranda zombies