Zombie Weapons: Are You Ready?

Zombies are the coolest! I think I’ve made that point quite clear. But in reality... they are dangerous killing machines. As cool as it may seem to have a zombie hanging around your house, or chained up for your entertainment, that could lead to all sorts of deathly scenarios. When the zombie outbreak occurs (and I reiterate what many other publications have stated... *when* the outbreak occurs, not *if*) one must be absolutely prepared!

I pulled out my copy of The Zombie Survival Guide because, after all, it claims to offer “complete protection from the living dead.” Rather than just summarize what all the different weapons are (since, by viewing this blog, I am assuming that you know how to read and therefore can see the book for yourself), I wanted to see how I would personally stack up in a world full of zombies!

First up, we deal with the lack of weapons. Hand-to-hand combat is NOT recommended for battling with zombies. However, depending on the circumstance, it may be necessary. When it comes to simple fist to decaying-flesh fist fighting, I will readily admit that I am very ill prepared. I’ve never had any sort of martial arts training, no kick boxing, I don’t work out. Hell, I don’t even do yoga! If I find myself in a situation that requires my fists, I will just hope my survival instincts will kick in and I can find strength I never knew I had!

There are hand weapons one can use for close combat, and those I do find I have in my possession. First up are bludgeons! To have an effective bludgeon, it must be able to do a killing blow to the head. Max Brooks weighs the pros and cons of several different items. In my personal arsenal, I have common items. His bet for the best close combat bludgeon is a crowbar. I sadly do not have one of these, or at the very least don’t know where it is in my house. So, crowbar out. I do have a hammer, an ax, a sledgehammer, and baseball bats. Although these may not be the best defense, they would at least let me put up a good fight.

One item not mentioned in the survival guide, but I think would be an amazing tool against the undead, is a fire poker. Why the fire poker was not included... I’m not sure. Perhaps it is easy to overlook the poker because many people simply do not own them! A lot of people live in homes or apartments that do not have fireplaces, and what’s more, if they do have fireplaces, they are often gas operated and require no poker! The fantastic thing about the poker is that it is made of iron (I believe) and is quite heavy, but not heavy enough that it is unable to be wielded. This weight allows the poker to have enough force to bash through skull bone. And, of course, it POKES! Imagine that. Take that pokey end and drive it through the fleshy eye socket of a zombie and into its brain. Plus, as an added bonus, the poker usually has a hooked part, so once it is in the brain, move it around a bit and it is going to obliterate the grey matter.

Moving on to edged weapons, here I do pretty good as well. In these types of weapons, they need to be durable, lightweight, and sharp-- able to slice the head clean of a zombie. I wish I had a bunch of cool medieval looking swords hanging on my walls, but alas, those things are expensive, yo! What I do have are a couple of old machetes in my garage. They might be a little rusty, but they still get the job done. If I anticipate that the zombie hordes will be coming, I can sharpen them and get them battle ready in advance. Maybe I should head out to the garage and do that right now....

Power tools. The name alone suggests great potential. Horror movies have taught me that the chainsaw can do a lot of damage. Think Leatherface on the side of evil and Ash on the side of snarky, but good! Those babies can just rip someone to shreds. But Mr. Brooks points out the issues one might have. First of all, the saws require gas. No gas, no killing. They are heavy. I doubt I could lift one for any extended period of time (see paragraph four). And the risk of injuring yourself increases greatly. Not to mention, when you rip an enemy to shreds, their blood would fly every where...very messy. And if one drop of that blood got mixed into an open sore or your eye, you would be a zombie! Not worth the risk, in my opinion. I’ll leave it hanging on the garage wall for now. 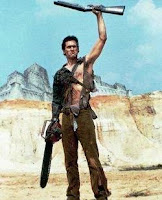 Guns seem like the best choice when choosing zombie fighting weapons, but let’s be honest. How many of you actually own a gun? I don’t. I can’t think of any of my friends that do, save for my friend who is a State Trooper. But that doesn’t do me much good. When the time comes that I need to think about killing zombies, unless I team up with someone who has one or I steal one during all the panic and chaos, a gun will not be a part of my arsenal.

How prepared will you be? What sorts of everyday items do you have around your home that can used as a zombie killing machine? Some other weapons I have thought to use are a fire extinguisher, drum sticks, shovel, and a Wii remote! Oh wait, that last one is only useful in killing computer zombies... okay, scratch that one...

How will you react WHEN the time comes?

I already know that I will not be prepared for the zombie apocalypse, no matter how many articles I read about it. I have the proof here.
miranda zombies