The House of the Dead: Overkill

To further prepare myself for the coming hordes, I spent a good deal of time this week with The House of the Dead: Overkill. This game was only released on Wii, and while I know many people are not fans of the Wii, trust me, this game is worth it to get over your hatred. I’m not saying to go out and spend $200 for one game (although, you really should), but if you happen to have a friend who owns a Wii, pick this game up and get ready for some fun! And if you already own a Wii and don’t have this game-- why not??

A little background on the game itself and its story.  Set in 1991, seven years before the initial House of the Dead, the game supports one to two players-- either Agent G (in his rookie days, before he is seen in the first game), and Detective Washington.  The two are an unlikely pair who join forces to fight their way through a horde of ‘mutants’ (really zombies, but one character says, “don’t use the Z-word!”).  Their main bad guy is a man called Papa Caesar who has forced a young scientist to help him create a drug that will mutate humans into zombies. Along the way they also meet and somewhat team up with Varla Guns, a stripper and sister to the young scientist. 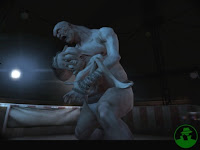 The game story line resembles the make of a grindhouse movie, and was modeled after the film Grindhouse presents-- Planet Terror (an excellent film if you haven’t already seen it). Whereas in the normal House of the Dead games you play in ‘chapters’ of the story, in this game each section is it’s own ‘movie.’ Each area has its own movie poster and cheesy over-the-top narration. Some sections include “Papa’s Palace of Pain,” “Scream Train,” and my personal favorite “Carny,” which takes place at a creepy zombie carnival! Evil mutated clowns jump out at you, you get on a sketchy carny train ride that takes you through a maze of zombies (it almost resembles Captain Spaulding’s ‘Murder Ride’ from House of 1000 Corpses), and the final boss of this level takes place in a freak show and features.... PARASITIC TWINS!

House of the Dead: Overkill is rated M for mature audiences only. Normally I wouldn’t care what a game is rated, I would recommend it to anyone. I also own House of the Dead 2 for Wii, and although those games are rated M, I think they would be fine for the average teenage gamer. Scary at times, and a bit graphic with blood (especially in 3), there still isn’t anything too outrageous or mature. However (and this is a BIG however), the same cannot be said for Overkill. If you have children, I would not buy this game for them. It isn’t the violence or the gore, I think kids can handle that based on all the other games out there, but the language and themes in this game are so over the top I stand by its 17+ rating. Being like an Exploitation Film, the use of the ‘f word’ is highly rampant. VERY highly rampant.

In fact, the Guinness Book of World Records gave this game the honor of being the ‘Most Profane Video Game’ of all time. I’m not sensitive to bad words, and don’t feel it is bad to have kids hear one of two... but throughout game play in Overkill the script has 189 uses of the ‘f-word.’ That translates to a little over one use every minute. But because there isn’t a lot of dialogue during actual game play (just during the little movie portions), it ends up being more like one every few seconds! Another reason I would not recommend this game to children is the subject matter. No, not the zombies, not the violence, but the ending. I won’t give away the ending because it is something you need to experience for yourself without being spoiled. Let’s just say... it is highly disturbing and a true ‘gross out’ moment for anyone!

I really enjoy the game play in this version of the series! One of my problems with the other games in the series is that you are given a certain number lives to begin with. When you are hit enough you lose a life, and when you use up all your lives, you simply die and the game is over. Your progress is lost and you have to start over. And of course in the arcade versions, you can keep playing... if you put more money into the machine. The best thing about Overkill is you are allowed to continue without losing your place if you die. Throughout the game you earn points based on kills and combo shots, etc. If you die, you have the option of continuing, but the game takes away half of the points you’ve earned. In this way, even a novice player can enjoy the game and make it through all the levels. The only exception to the ‘continue’ rule is found in the “Director’s Cut” story line. After you beat the initial game, you can replay in the Director’s Cut mode which has more and tougher zombies, but you also have a limited number of ‘continues’ to use.

After the completion of each scene you are also able to earn money, based on performance, that can be used to buy new guns and upgrade the guns you already have. Faster reloads, bigger clips, high powered rifles-- all these can be yours for several hundred or thousand dollars each round. And like the other games in the series, there are a series of mini-games which help you to play the main game. My favorite in this one is the target practice that is set up like a carny shooting game!

Overall, this is definitely my favorite House of the Dead game, and I’ve played them all. It is funny, witty, visually awesome, and just a fun time! And Varla Guns has become one of my favorite video game characters. I’m always on the look out for a new person to cosplay as, and she may be it. She even has the exact same lip piercing that I do on the right side of her face (most people I have seen have theirs on the left). And of course, being based on Planet Terror her character is very reminiscent of Rose McGowan’s zombie fighting stripper, so I’m even more a huge fan.

My only criticism of this game is that sometimes the Wii-mote doesn’t aim properly or doesn’t pick up right away. This may not entirely be the fault of the game, but could be my sensor bar (although I did a sensitivity check right before playing to avoid this and it still was sketchy in aiming at times).

This game is fun alone, but is ultra awesome with a partner! Two guns are better than one, after all. And once you beat the Director’s Cut Mode, you can use the Dual-Wield Mode, where four guns can be better than two! Guns can be used with the stand alone remote or with the Wii-Zapper.

Seriously, do yourself a favor and try this game out. You won’t be disappointed.

PS- A few weeks ago I told you about Jonathan Coulton’s “Re: Your Brains.” For all you Rock Band fans out there, that song *is* available for download and game play! Only 100 Wii points (one dollar) for those with that gaming system. Check values for other consoles.