By Alicia Gregoire - February 08, 2010
I love my music. I listen to it all the time. One thing I love to do is to find new bands to listen to. This can be difficult when you have radio stations that don't push the envelope. (This is not counting college radio, which I do listen to once and a while.) Because of the suck factor on regular radio, I would use internet radio.

I used to listen to a lot of Pandora Radio when I would be writing, but after NaNoWriMo, I got tired of the selection that kept coming up on my channels. It's great to suggest music based off of key attributes, but sometimes I just want to know what Person X is listening to when they're not listening to Band A.

Last.fm is an internet-based radio system that plays recommendations based off the other bands/songs/pachyderms you like. It uses this thing called a Scrobbler, which ultimately adds the song into your music library. I'm finding that this is a more effective way of finding new music than Pandora's music genome project. The website also includes all the genres that any given band falls into.

As much as I like Last.fm, I'm finding some pitfalls with this program too. Like, the constant flow of the electronica side of goth music. There's a couple of songs that I like; they're peppy and pretty awesome at the gym (when I used to go to the gym, at least), but that doesn't mean I want five songs back-to-back of what my mother would definitely classify as "noise." Because of the amount of EBM, electronica, trance, etc. that pops up, I have to stop and forward through it to get to the next song. (If you listen to it for 8 hours a day, this can become a pain in the ass.) 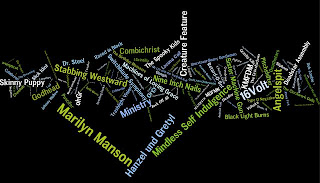 Another downfall is that it's playing the same bands even in Neighborhood mode. I made a Wordle based off of the bands in my library and how many times they have been played since I signed up in December. Out of 112 bands that I've listened to, my top two are 16Volt (a band that I only own when it's part of a compilation) and Ministry (a band that truly lost any musical talent once George W went into office).

What have been your experiences with internet radio?
damn you internet music wordle