George and Me-- An Epic Tale of Zombies!

Well, I survived my first HorrorHound Weekend.... and it SUCKED.

Okay, April Fool’s! Actually it was awesome! I’ve barely had anytime to rest since returning, and I’m already off on my next adventure-- getting ready to perform Repo! the Genetic Opera in Chicago on April 9th at the Music Box Theatre (end shameless self-promotion). As such, I will try to keep today’s Zombie Thursday entry short and sweet because by the time you all are reading this, I’ll be on a train headed for Chicago to rehearse.

My HorrorHound adventures are quite lengthy, but what I will share today is what you all really want to know about-- meeting George Romero!

As I anticipated, my official meeting with him was very brief. But I had a few other awesome Romero moments throughout the weekend anyway. First off, let me just state that George Romero’s manager is awesome! He was a really cool guy and really relied on my friend Shae (who was also working on staff), and later started to get friendly with me. On the final day of the weekend, our paths crossed early in the morning and he greeted me with a big hug! Such a nice person, very friendly, and obviously a great manager. 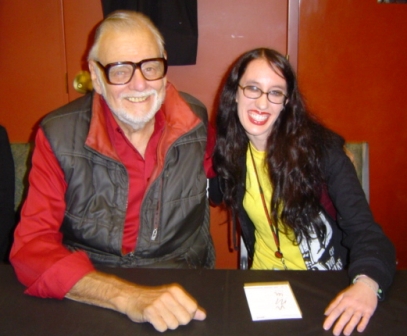 One of the perks of working on the staff at a convention such as this is that you typically get one free autograph from the guests in attendance. George was no exception, but naturally the line to meet him was literally hours long. Working on staff, we didn’t have time in the day to stand that long in line. Solution-- private staff signing before other attendees could enter the hall! When it was my turn for an autograph, I greeted Mr. Romero and shook his hand. I told him what an honor it was to meet him and how much I appreciated all of his films. He signed my copy of Dawn of the Dead and even took a photo with me. As I sat down with him for my photo, I wished him a happy belated birthday and told him we shared the same day. And don’t worry, I also told him I wrote a weekly blog all about Zombies, to which he seemed impressed!

Meeting him and getting the autograph and photo was really cool, but very quick. The best moment with Romero came the night before in a completely unexpected way!

As Saturday evening drew to a close, Shae and I were waiting for some other staff members to move some things before we could go home. We had some time to kill and decided to sit down in a little lobby area and play a quick card game. Game of choice-- Zombie Fluxx! You may remember my entry on that game...

So, we’re playing and have about four New Rules out on the table, several Keepers each, but no Zombie (Creeper) cards. It was my turn and the first card I drew was a Zombie card! If you recall, once you draw a Zombie, you have to play it immediately. While I was setting down my card, Shae (who had a view of the hallway leading to where we were sitting) started to mutter under her breath, "Romero... George Romero..." I looked over, and sure enough, turning the corner was the Godfather of Zombies himself, George Romero!

As he and his previously described awesome manager walked by us on their way to the elevators, George looked down at us and what we were playing, smiled and pointed to the cards. We both smiled back and I said (as cutely as possible), "Zombie Fluxx!" Romero nodded and smiled at us as he moved on. 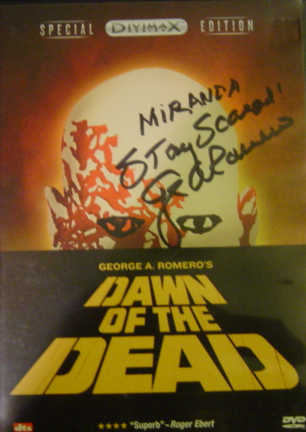 And in fact, the game continued for quite awhile after that. We ended up having probably nine different rules in play, just as many zombies if not more littering the floor, two goals, and hardly any cards left in the draw pile before I finally won. It truly was the most epic game of Zombie Fluxx that will ever be played, and it was officially sanctioned by Romero himself. And the next day when we met him for our signings, Shae had him autograph the Fluxx box and even explained a bit how the game was played!

All in all it was a great weekend, and that was just a small part of it!