Survival of the Dead-- Survival isn't just for the Living

Zombie Thursdays is a weekly feature with guest blogger, Miranda. You can read more about her here.
Two weeks ago I finally saw and reported on George Romero's movie Diary of the Dead. I loved Diary! I found it to be thought provoking, scary, and a great zombie film. So, I was pretty excited to go see his newest film that is currently showing in select theatres, Survival of the Dead. 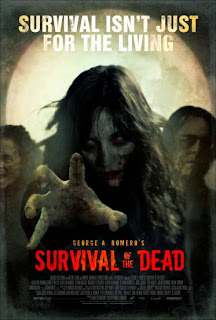 The latest film takes place a few weeks after the events of Diary, and follows a rogue National Guard team that the audience briefly meets in Diary. Like the rest of the world, they are trying to survive, to find a safe place. After viewing a video online, they think they have found such a place on a small island off the coast of Delaware. The island is home to two warring Irish families-- the O'Flynns and the Muldoons. One family believes that eventually a cure will be found for the undead phenomenon, and think that the dead should be kept chained up repeating tasks stuck deep in their memory banks. As you can imagine, the other family believes that all the zombies should be shot in the head, no questions asked.
This conflict is what really drives the movie and makes the audience think. In a world where we have Zombie Survival Guides and blogs that tell us what the best weapons are against undead attackers, it is interesting to step back and think, 'should we keep them alive?' Could there possibly be a cure? And as I've spoken about before in many of these Thursday entries-- how easy would it be to just shoot your wife, your daughter, or your brother in the head? The families in the movie are painfully aware that the undead lust after eating human flesh, so the goal becomes trying to get them to eat something other people.
I won't give away exactly what happens, or how it concludes, but I will say that I did enjoy this film, however, not nearly as much as I liked Diary. Survival of the Dead was a great movie with some really spectacular actors. And although I liked the concept of the plot and some of the questions it brought up, I found parts of the film to be a bit silly. This installment was certainly more comical than its predecessor-- some of the zombie kills were downright hysterical and had the audience laughing. I do enjoy humor in my horror movies, but this really wasn't supposed to be a comedy, at least I wasn't expecting it to be. When I was watching Diary, sure there was a bit of humor and wit, but it was very intense, very scary.
My friend Richard (a huge, huge Romero fan) disagrees with me completely on this. He loved Survival and wasn't a huge fan of Diary. I encourage all of you to watch them both, as I really think they are both excellent films! No matter which you prefer, you're going to have a great time viewing them. And I'm sure it's only a matter of time before the next chapter in the 'Dead' series comes out...
And for those who have seen both, I'd love to hear your opinions! About the movies, the concepts and ideas brought up-- anything. Just be careful to mention spoiler alerts.
movies Romero zombies