By Alicia Gregoire - August 17, 2010
While staying at the Real World Cottage, we had the redneck neighbors from hell. Their yard housed tetanus and their porch was loaded up with, erm, crap. They were loud. They climbed onto the roof of their cottage more than once - with one of those times in a gorilla suit.

The grandmother was nice enough to let us search their yard for the badminton birdie, so I overlooked everything except the gorilla suit. (I tried to get a picture but couldn't.)

Correction. I overlooked everything except the suit until I saw the 9 year old with a live crab. He stuck the crab on the side of the road and pelted it with pine cones trying to get it to move. He wanted to see it get run over by a car. The child ran off as a couple of walkers happened by. They wondered how the crab got this far from the beach. Hubby and I used this moment to rescue the crab.

We stuck him in a bowl with water and brought him back to the shore where I'd like to think the gulls left it alone. If they didn't, at least nature did it's thing instead of some mullet-headed child. 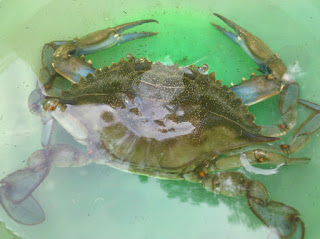 A few days later, Hubby found the same child with another crab. The father caught him and according to Hubs, didn't say shit about the child wanted to kill this crab. I'm not sure what was said, but the gist was that it's okay to torture animals.

Parents. Why would you let your kid think this behavior is acceptable? Just because it's not a person or a domesticated critter, doesn't give you or your kid the right to maim or kill it. Would you want a giant to pick you up and bash you around because it could? No. All forms of life deserve respect. You should instill that in your kid from day one.

If you can think of some reason why this father didn't smarten his kid up or if you want to share your outrage with me, comment below.