Necromancy and the Zombie Apocalypse

A few weeks ago (or maybe months?), Alicia made a suggestion in a Zombie Thursday comment to discuss how necromancy will play a part in the forthcoming zombie apocalypse. She probably thinks I ignored her suggestion, but just as she didn’t ignore my, er, her blog’s comments about initially starting Zombie Thursdays, I’m certainly not ignoring her fine idea!
Since several entries, including last week’s, have been about what might possibly cause a zombie uprising, I thought this would be a good time to discuss necromancy and how it could play a role. When you think of Necromancers, what do you envision? Personally, I always pictured a magician, into dark magic, who would raise a corpse to do his bidding. Or a person similar to the character in Haeckel’s Tale (reviewed awhile back during a Zombie Sex-tacular! blog) who brings forth the dead. Seems standard, right? I know everyone seems to be into World of Warcraft these days, but I’m a Diablo II girl, and one of the classes you can play is a Necromancer. As this spell-casting character, you can raise skeletons that fight for you, have zombie creatures/ghouls that eat the creatures you slay to give you strength and energy, and in general just deal with dead creepy things. So, whenever I think of necromancy, that is the image I conjure up. 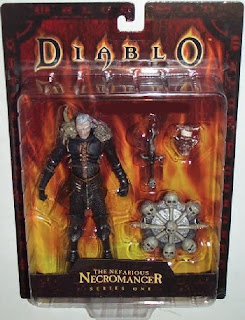 It’s easy, then, to imagine that a modern day practitioner of necromancy could raise an army of corpses (or for our purposes, zombies) and use then to do their bidding (similar to voodoo zombies). This hypothetical necromancer might lose control of his risen dead (as things of this nature always go terribly wrong) and they would go on a brain eating spree.
Right?
Imagine my surprise when I did some research on necromancy and found that it really isn’t what I imagined at all!
The term necromancy originates from the Greek words ‘nekrós’ meaning “dead body” and ‘manteía’ meaning “prophecy” or “divination.” Basically, necromancy is less about raising the physical body of a corpse and more about summoning spirits or ghosts of the deceased to gain knowledge or insight about the future!! That’s not to say that the physical raising of bodies never occurs in necromancy. There are several myths and texts that speak of certain battles being fought with the help of necromancy-- when soldiers died fighting, powerful spell-casters would raise their bodies to keep fighting, making the army virtually invincible! However, from the readings I have done, it seems traditionally it is much more about calling forth spirits, or even demons who appear as the deceased. Based on this, I would say my imaginings of the necromancer are the way of strict fiction, such as in Diablo II. Disappointingly, I think we can rule out a zombie apocalypse brought forth by misguided necromancers!
Also as an interesting side note, a word about the Necronomicon, sometimes called 'The Book of the Dead'-- The Necronomicon is often thought to be a dark magic grimoire for summoning the dead, demons, and evil spirits, among other things. This version of the text is not to be confused with the Egyptian 'Book of the Dead' (as it is known). The mythos of the two texts are completely different and separate. Horror fans will often think of the Necronomicon as the flesh bound book found in the Evil Dead films. I always assumed the book was based on some historical magical text of necromancers, but I was shocked (and you may be as well) to learn the Necronomicon (even the name itself) is completely a fictional imagining of H.P. Lovecraft and first appeared in a 1924 short story! Who knew?