Zombie Thursdays is a weekly feature with guest blogger, Miranda. You can read more about her here.
Welcome to part two of the Robert Englund Zombie Sex-tacular! Before we get to the zombies, let me tell you a brief story of when I was first introduced to Mr. Englund's awesome greatness. I must have been about eight years old (maybe younger) and I was on a trip with my aunts. We were staying in a hotel and had the television on late at night. There was a show on, just at the very end. I don't think my aunts quite knew what the show was, or else they probably wouldn't have let me watch it (then again, I also have very distinct memories of watching Ghoulies 2 and Killer Klowns... at my aunts' house, so they probably didn't care all that much).
On the show, there ended up being a girl who was ripped to shreds by a clawed hand as her mother and sister looked on. That clawed glove belonged to Freddy Krueger and the show was Freddy's Nightmares. I remembered that imagery so vividly throughout my youth and regarded that moment of seeing my first glimpse of Freddy with a kind of reverence. It was later that I discovered the actor who played him and developed a bit of a crush. And ironically, just this past year I had the good fortune of seeing the very same episode on the 'Chiller' TV network that now airs Freddy's Nightmares! It was just as I remembered it, although it was a lot more '80s than I realized at the time.
As I mentioned last week, Robert Englund has been in so many things! I'm particularly fond of his performance as Erik Destler in the often overlooked 1989 version of The Phantom of the Opera. And although I wasn't too fond of the movie, Englund's performance in Tobe Hooper's Night Terrors was phenomenal! In it, he plays not only the Marquis de Sade (and gives a better performance than Geoffrey Rush in Quills), but also a modern character who is the leader of a cult that worships the Marquis. As I said, not the best film, but amazing acting on Englund's part. 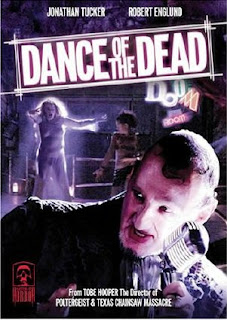 Which brings us to the topic of today! Englund starred in another Tobe Hooper directed piece that was also a part of the Masters of Horror series (which was discussed in the 'Haeckel's Tale' blog). The episode was entitled "Dance of the Dead," and features Englund in a similar role as last week's Zombie Strippers! He plays a character who is the owner of a night club (the Doom Room) with a very special form of entertainment. The show takes place in a war destroyed America. It is very much a barren post apocalyptic world in which many survivors have been burned and scarred by Blitz attacks from years before. One town in particular, Muskeet, is a lawless paradise for those on the very fringes of society. It isn't shocking that this is where the Doom Room is.
It was discovered during World War III (yes, three) that certain germ-gases caused something known as the "Lifeless Undead Phenomenon" or "L.U.P." Under the gas' influence, dead bodies remained erect and rigid and had a rudimentary form of muscle reactions (spasms, twitching), which was later known as the "loopy's dance." At Englund's club, the L.U.P.s are the nightly entertainment, displayed under the guise of scientific experiments so as to stay legal. And while the phenomenon could occur in any dead body, of course the L.U.P.s used in this show are all young hot naked female bodies that are shocked into motion by cattle prods. Because you should have learned by now that "zombies" are very sexy! The entire club has a Sado-Masochistic feel to it and Englund's character takes advantage of the L.U.P.'s wide open mouth expression for some pretty perverse zombie lovin'! 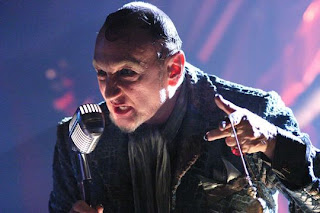 There's a whole lot that goes on in this sixty minute episode, all in front of the Doom Room's backdrop. I won't give away or tell the whole plot because this is a film you really should see! Not only does Englund give a sufficiently creepy, and at one point a very sexually disturbing, performance, but the entire ensemble is pretty top notch. The design and visuals in Dance of the Dead are pretty fantastic (especially the club) and it has a killer soundtrack written by Billy Corgan of Smashing Pumpkins fame! And you won't soon be forgetting the look of the L.U.P.s; I'm not usually very squeamish, but I couldn't get their frightening facial expressions out of my mind for days after I saw this for the first time back in 2005.
This episode should still be available on Netflix-- what are you waiting for? Kick off the Halloween Season with Robert Englund and the dance of the dead...
movies Robert Englund sex zombies