Zombie Thursdays is a weekly feature with guest blogger, Miranda. You can read more about her here.
Only a few days now until Halloween!! Does everyone have big plans for this weekend? I know I do! If I had it my way, the actual day of Halloween would be a huge deal this year with parties, movies, and all sorts of fun. However, since Halloween falls on a Sunday, most people seem wary of celebrating because they are too concerned with having to go to work the next day. Thus, it seems most parties are happening Friday or Saturday nights.
If you are of this mind and expect to let the actual day pass in quiet contemplation, think again! Sunday night is not only officially Halloween, but it is also the premier of the new AMC television series The Walking Dead! There has been a lot of buzz and hype about this show over the last year, especially the last few months, and I have to say, I am pretty excited about this one! We know all forms of good and bad zombie movies exist in the world, but here is a television show being made for an extremely legitimate (dare I say "highbrow") channel. As much as I love SciFi, or SyFy... whatever they call themselves these days, we all know what kind of quality of horror shows and movies they produce. 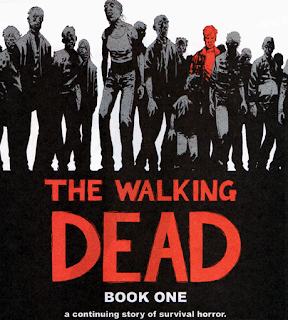 To me it seems like it was only a matter of time before a well produced, directed, and acted zombie show hit the airwaves. In fact, one of the main reasons I finally broke down and purchased Comcast cable is so that I made sure I had access to AMC to watch this premier on Sunday night! I wish someone had just randomly said, "let's make a zombie apocalypse television show!" Completely original and different. However, this new show is based off the graphic novel series of the same name. The Walking Dead was first published in 2003 and is written by Robert Kirkman with artwork by Tony Moore and later Charlie Adlard. The newest in the series is set to be released next month.
I highly, highly encourage you to check this out on Sunday night while you are sitting on your couch in a Halloween Candy Coma!* Below is the trailer for what will hopefully be an awesome new show everyone can become obsessed with!
*Still looking for opinions on best Halloween Candy! Seriously, let me know and ask your friends!!!
candy Halloween The Walking Dead trailers zombies