Would You Want a Pet Zombie?

Zombie Thursdays is a weekly feature with guest blogger, Miranda. You can read more about her here.
First off, I have to begin today's Zombie Thursday with a very special HAPPY BIRTHDAY TO ALICIA! That's right, today is the birthday of the woman who is the brains behind the whole 'Pie' operation! So in her honor, I would like to share this with everyone (found on the "MonkeyMinion" Etsy shop, available for purchase)-- 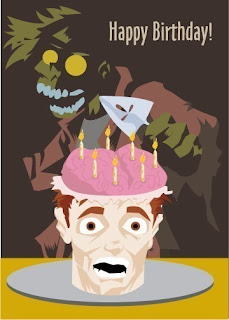 Yay! Happy Birthday! As soon as I discover where a post office is in Chicago (no, I really haven't figured this one out yet), her real birthday present will be in the mail! I still remember one birthday involving a hotel pool and an inflatable sheep... but I'll let her tell that story someday.
I have been watching a lot of movies lately. I'm not sure why, but I've just been in a horror movie watching kick. Good, bad, funny, horribly awful-- I've been watching them all. I've even had time to squeeze in some zombie films. I'm almost embarrassed to admit that I had never seen the zombie film Fido despite hearing nothing but good reviews on it. So this week, I had a moment to watch Fido and I can say with certainty that it is very, very good! 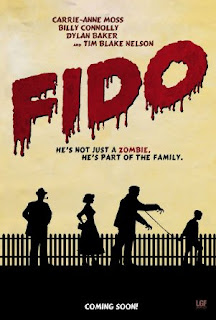 In the film, the world has suffered from poisoning due to radioactive space dust. The cloud that descends upon the Earth naturally turns all dead bodies into reanimated zombies. As such, a Zombie War took place in which humans were victorious and stopped a complete apocalypse. One biotech company emerges as a saviour of sorts-- ZomCon. ZomCon has created a collar device that blocks a zombies natural tendencies to eat human flesh. With the collar on, zombies are docile and can act as household servants.
One family purchases a zombie, who is played by Billy Connolly (Boondock Saints, etc.), and their young son becomes quite attached to him and names him Fido. He treats him like a pet and a friend, trying to play catch and fetch and making him help with his chores. Unfortunately, Fido's collar malfunctions and he kills a neighbor, who then kills and turns others! With a containment issue on their hands, ZomCon steps in and separates the boy from his zombie pet. The rest of the film follows the boy's plan to save Fido and bring him home, although it doesn't quite go as planned... but I'll let you watch to find out how it all ends!
If I could use any word to describe this film, it would be 'cute.' I know one typically wouldn't use that term to describe a zombie film, but it really is just a cute, sweet little movie. While it is funny and has its moments, I wouldn't personally describe it as a comedy (at least not the laugh-out-loud variety). The character relationships are really interesting-- Timmy (the young son) and Fido, Fido and Timmy's mother, and even Timmy's neighbor with his zombie "girlfriend," Tammy.
One theme throughout the movie is whether or not people want to be zombies when they die or have "head coffins" to be buried in (a separate coffin just for a decapitated head, ensuring no reanimation). Timmy's father is extremely adamant that he wants to be buried in a head coffin while Timmy and his mom decide they want to "go zombie." Definitely an interesting concept, having a choice of how you die. Zombies can become seemingly useful members of society, and based on the interactions between Timmy and Fido it is revealed that Fido has feelings and emotions towards Timmy, a sense of loyalty (even when the collar has malfunctioned). Given that, the zombies aren't necessarily mindless flesh eating machines... so would it be so bad to be a zombie? 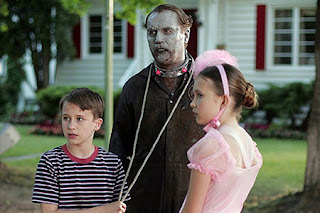 Definitely check this film out! Even though it is rated R, there really isn't anything outlandishly bad other than a little gore and obviously gun violence. But it is quite tame compared to any other zombie movie I've seen. And although I obviously didn't grow up or live in the 1950s, I always find something strangely nostalgic and comforting about movies that take place during that time period. Those movies just always seem so happy, and I think Fido is the same way!
As a final note, 'The Pie' is quickly gaining in the Lurkdom... we're almost to 75!! Alicia and I are cooking something up for a race to 100 type of contest, so stay tuned and bring your friends along to join in on the fun!!
birthday movies Reviews zombies