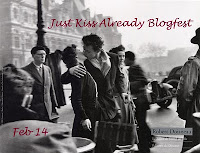 Happy Mass Marketing Day, Lurkdom. Instead of ranting about how much I hate this holiday, I thought I'd be productive and participate in Stina and Christina's Just Kiss Already Blogfest.

The rules are simple: post a 250-word scene where actual kissing happens. Then read and comment on at least three other participants.

While trying to find something for this, I realized that I don't have a lot of kissing scenes in my writing repertoire.* Because of this, I'm sharing a scene from my recently finished WIP**, Phoenix Rising. So if it's still a little rough, that's why.


Kyla wanted to go home. She should’ve never made the initial arrangement in the first place. Should she call Janice and tell her she wouldn’t be coming home tonight? What would she say? “I’m paying my debt of gratitude to the police for not hauling me to jail.”

She was over her head.

“Found your way back here already?” A towel was cinched around Pike’s waist and water clung to his skin in greedy droplets. His hair was mussed and damp.

Kyla pushed past the fact that it was such a sexy look for him. “I should go home,” she said.

He lowered his head so he was eye level with her. He splayed his palms against the bedroom door, trapping her in between. “Didn’t you like the other night?”

He didn’t wait for an answer as he leaned forward and kissed her. He fed off her lips and took his time tasting her. The rough urgency from the other night disappeared, which left room for a more delicate interlude. Each gentle sweep of his tongue weakened Kyla’s knees more until her legs gave way under her. Pike hoisted her up and Kyla wrapped her legs around his waist. Wedged between the door and the wall that was Pike, Kyla explored the contours of his body.

“Stay,” he whispered in between soul-searing kisses. “When will we get this chance again?”

Thanks for reading and definitely check out the other participants!


* Which probably says loads about me.
** By recently finished, I mean it's a week old.
___________
Last.fm hit of the day: Love-Hate-Sex-Pain by Godsmack
blogfest excerpts phoenix rising