Zombie Thursdays is a weekly feature with guest blogger, Miranda. You can read more about her here.
Tomorrow is my birthday and I'll be another year older (don't forget, tomorrow is also George Romero's birthday). Birthdays are always kind of weird. Everyone else always puts such a huge significance on becoming a different age, but to the person who is actually turning a year older, it really feels the same as it did the day before. Tomorrow I will feel no different being 27 than I did last year turning 26. And honestly, I'll feel no different tomorrow than I did turning 25 (although I turned 25 at Disney World and that was pretty bad ass!).
When do we start feeling the age difference? In fifteen years, will I look in a mirror and think, "oh, crap! I'm definitely not 25 anymore." Or do we always just feel like ourselves and it's other people who notice the differences and changes in the way we look and act?
I started to think about all of this not only because tomorrow is my birthday, but also because of a movie I caught on television yesterday while I was stuck inside during the Snowpocalypse. Yesterday, the USA network aired the remake of Dawn of the Dead. This film (although hardly a remake) is a really great zombie film. I've seen it at least twenty times because it does get played frequently on television. It's always showing up randomly on USA, MTV, FX, and other channels (think of all those royalties the actors are making). So, I wasn't surprised to see it on yesterday. What shocked me though was at what time of the day they were airing it. 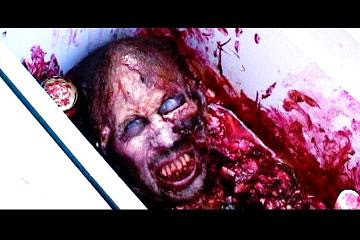 Image from 2004 Dawn of the Dead film
It was 2pm and here was a very bloody and gory zombie film on a basic cable network. I wasn't upset or offended by this in any way, but how would other parents feel with their children watching this type of film in the middle of the day? I remember being very young and watching zombie movies, but it was always late at night on shows like TNT's MonsterVision.
So, I guess the debate is-- what age is appropriate to watch a violent and graphic film like Dawn of the Dead? I don't really have an answer. I don't think there is one. I started watching horror movies when I was very, very young and it didn't "mess" me up. Yes, my apartment is decorated with an army of Cenobites, zombie calendars, and Halloween collectibles, but I'm an average girl who goes to work at an average job and does average boring things. Maybe it's okay for all young children to watch blood and guts be splattered across the screen?
In a world where a ten year old child banned the airing of a Saw ad after seeing it at 8:30pm, how is watching a zombie film at 2pm any more appropriate, considering it is a film that is rated R and supposedly for those over 17? Obviously some parts were edited out for television, but it was still quite graphic overall. One could argue that it is up to the parents, that the parents should have the final say in what their children are watching. But let's be real-- are parents really monitoring what their children are watching at 2pm? Most parents probably aren't even home from work by the time their kids get off the bus. And I highly doubt my parents realized just how many horror films I was watching at that age.
I'm not criticizing USA or their decision to air the movie so early. Personally, I could care less. It's one of my favorite movies and I'm glad they showed it smashed in between episodes of Law & Order and NCIS. But I also don't have children and am slightly biased because I have been watching movies like Dawn of the Dead since I was five. I try to look back at the young Miranda. Maybe not the five year old Miranda, but let's say the twelve year old Miranda. She doesn't feel any different than the person I am now. I was always very mature (I think Alicia can attest to this fact considering we became friends when I was fourteen), and I knew the difference between fantasy and reality. 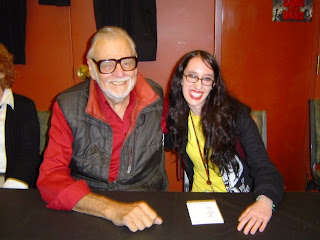 Miranda with George Romero at the HorrorHound Convention
So, to everyone else in the Lurkdom, especially those with kids, what are your thoughts? Are horror movies detrimental to young children? Or are they really not a huge deal if the product of watching horror films turns out to be an adult like me-- literate, intelligent, well adjusted, and normal? I honestly feel like I turned out to be a better adult because of my involvement in the horror community. Especially in the last few years, I have met many people in the industry, and the people who are making and supporting these types of films are some of the nicest and sweetest people you will ever meet. It's a small community, but a close knit and intimate one. We just all happen to share a love for all things macabre. But the films themselves get a bad reputation for being violent and evil. That doesn't mean the people who like them are the same way...
Share your thoughts with us! And invite your friends to follow The Pie! We're five away from 100 in the Lurkdom. When we hit that, I promise there will be a contest...
age birthday Dawn of the Dead parents television zombies