Zombie Thursdays is a weekly feature with guest blogger, Miranda. You can read more about her here.
To be honest, I feel like a zombie today. I don't know why... change in weather? Not enough sleep? Too much sleep? The "excitement" of having to go to work in fifty minutes? I'm really just not sure. But usually when I'm feeling like this, I like to surf the interwebs for some good zombie material.

Today I stumbled upon the Zombie World News website. The website is very interesting-- part news reporting, part collective writing project, part social commentary, with lots of other parts thrown into the mix. The majority of the page seems to be an archive for various news articles from around the world and chronicles the outbreak of a zombie virus known as necro-mortosis. The articles begin around 2006 (although these are back dated, the site isn't that old) with the first signs of the virus emerging in Haiti. The rest of the news stories come from different sections of the world as the ongoing zombie outbreak occurs. At the moment, the writers have purposely not made the outbreaks into an apocalypse style catastrophe (like World War Z scale apocalypse). The progression is written as a slow build up, having readers believe there is a threat, but not causing a panic.
So, what's great about this site? It seems like it is a community project. Everyone is encouraged to submit news articles to help keep the narrative of this zombie story going. There are submission guidelines that can be found on the page to help you out before you send something in. As I mentioned above, right now they are looking for small, personal stories about an emerging outbreak, not a full on zombie war. In this "world," that hasn't happened yet. I really respect that aspect, because so often in zombie movies or literature, the reader just assumes the outbreak has already happened on a large scale. Wouldn't it be cool to see a And The Band Played On style zombie movie? Showing the origins and the build up to a zombie viral epidemic, but never really showing the full on disaster? (If such a film exists, please let me know!!)
There was also a really neat article about quarantine centers popping up all over the country and that many were being protested. Protesters could be seen holding signs that said, "Get a Life!" and "God Hates the Undead!" The first thing that came to my mind was a commentary on abortion clinics and the protesters that can frequently be seen outside with signs like, "Choose Life!" However, I may be giving the writers too much credit for their cleverness. 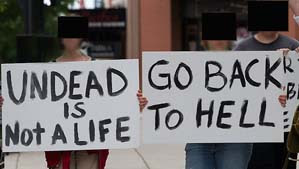 Now... what's bad about the site? Editing. Editing, editing, editing. I understand this is a site with submissions from all over and people with various writing abilities and talents. However, they claim the right to edit any article submitted for grammar errors, etc. They fail. Not only do most articles contain huge errors (and I'm not talking "oh, I think there should be a comma there..."), but even the official FAQs and "About Us" page are filled with punctuation errors, the first letters of sentences are not capitalized, and (most frustrating of all) the site seems to use the word "none" when they really should be saying "non." For example, they talk about internet sites selling remedies for the necro-mortosis virus, but state that these are "NONE effective." This usage was not a one time mistake. I encountered it everywhere on the site. Perhaps the site is run from another country and this mistake is a language barrier issue? I don't know, but it was very annoying.
In the end, it is definitely worth checking out, especially if you have some time to kill or are at work and are tired of reading real news articles about politicians' penises and Sarah Palin's magic school bus. As a final note, so as not to panic the easily confused or hoodwinked, the site is very explicit in saying it is for "entertainment purposes only." There is no zombie outbreak. Yet.
fake news parodies Reviews websites writing zombies