Zombie Thursdays is a weekly feature with guest blogger, Miranda. You can read more about her here.
Hello, zombie fans! During Halloween week, there were a lot of great shows on television that would never be played throughout the year otherwise. It's cool that channels like the History Channel and Discovery will air shows about zombies and witches, etc. during October, but kind of sad that they won't air anything like that the other eleven months out of the year.
I happened to watch one really cool show about zombies! Even though the show had a lot of repetition and not a ton of new information, it did bring up some very interesting points. One of the main things I took away was a comparison to other viral plagues that have crippled the planet throughout history.
I had never thought of zombies in this way. While perhaps a zombie apocalypse may not happen in the foreseeable future, there is the potential for a viral outbreak to occur that could completely destroy society the way we know. For example, the bubonic plague was one such outbreak. The Black Death, believed to be caused by a bubonic plague outbreak, killed and destroyed over 75 million people in Europe, a third of the population. An outbreak of that type dramatically changed society. Can you imagine a third of your city or the country being wiped out? What if instead of just dying, the infected actually "woke up" and began attacking the uninfected?

Can you also imagine what the streets would look like? During the Middle Ages, because of the numbers of corpses, traditional burials were thrown by the wayside. Many bodies were left piled in fields, burned, or thrown into huge pits. Sounds familiar to some scenes in zombie films and television shows.
Another fitting example was the H1N1 flu pandemic that lasted from 1918 to 1920. During this outbreak, roughly 100 million people were killed and 27% of the world's population were infected with the virus. What was so devastating about this outbreak is that instead of infecting and killing the usual demographics (very old or very young people, or those with weakened immune systems), it also killed young and seemingly healthy individuals. Just like a "zombie" outbreak, the virus did not discriminate on who it attacked or killed; everyone was vulnerable. 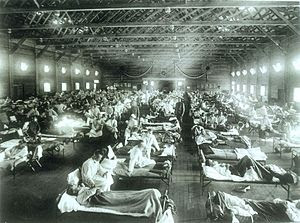 It is extremely possible, and probably extremely likely, that history will repeat itself in some way in regards to another viral pandemic. Will it be the flu? Will it be bubonic plague? Or will it be zombies? Either way, life as we know it would change dramatically. Even with our modern scientific breakthroughs, we cannot guarantee that we would be able to catch or treat ourselves before it's too late.
Makes you think twice about not getting that flu shot this year!
1918 flu bubonic plague documentaries zombies