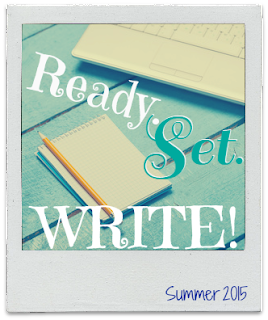 Ready. Set. WRITE! is a summer accountability series that is hosted by Jaime Morrow, Katy Upperman, Alison Miler, Erin Funk, and Elodie Nowodazkij. We set goals for the summer and check in weekly.

This is it. The final check in. Queue up the opening chords to The Final Countdown. (If you have no idea what this is, click here.) I managed to knock off everything on my summer goal list plus plot out a the sequel to PHOENIX RISING. Because of RSW, I seriously accomplished so much. So a big thank you to Jaime, Katy, Alison, Erin, and Elodie. You guys helped me get so much done.

My summer in a nutshell was research and work on three different projects. I can only hope that I'll continue to be this productive come the fall. (Which you'll be able to find out every Monday where I continue with accountability posts. Unofficially, I'm taking this week off.)


How I Did Last Week

Because we all worked so hard on RSW, we deserve a manicure as a reward. Disclaimer: I'm not very good at these. I'm pretty much a slap the nail polish on and call it a day type person. So it was a little hard to do something different. And because I dealt with 3 different WIPs, it was hard to figure out which one to do.  I decided on the boy band book because it's plagued my waking thoughts recently. Since Colt's in a boy band (and ends up in another band) I went with music notes.

And the excerpt...
Here's a really rough excerpt from the boy band book. This scene is from Colt's POV. Because of some bad choices early on in the novel, he's been forced to move back to his hometown--a place he hasn't seen in 5 years--and make amends with the friends he left behind.

I print out the file Kevin sent with the terrible cheesy songs he expects us to sing on our next album. If there is a next album. And bring them to school next morning.

Maddie sits on the front stairs of the high school, book and notebook in her lap, pen in between her lips. For a second I picture something else in place of that pen until I shove that into the late night compartment of my brain.

“Hey, thanks for meeting me so early,” I say as I climb the steps and sit next to her.

“It’s no problem. I was coming in early anyway.” She tucks her notebook into the textbook to mark it’s place and put both back inside her book bag. “What’s up?”

“I need your opinion about some lyrics.”

“I don’t. That’s the problem. Someone else always does it for me.”

I pull my backpack onto my lap and pull out the sheets of paper from my email. Maddie leans close to peer at what I’m grabbing and the flowery scent of her perfume hits me. I ignore the way my body jerks in reaction to her and talk my way through what I’m about to show.

“Kevin—our manager—sent us a bunch of different songs acceptable for our next album. We’re supposed to pick our favorite ten songs and go from there.”

Maddie accepts the pages from me, our fingers brush against the others as she does. I want them to stay that way so I can have that small amount of contact besides her arm and leg pressed against mine. As she reads, I explain why I want her opinion. All because of my conversation with the green haired mohawk kid in detention.

Maddie giggles as she reads through the lyrics. “Colt, these are horrible. I think I wrote better poetry in ninth grade English.”

She moves her lips as she reads, no sound coming out. Fascinated, I watch as she absorbs everything in front of her. This is why she does so good in school I bet. And if she takes something as stupid as potential Back 2 Front lyrics this seriously how would she be with something less academic and more physical? Not that I should think about that.

She hands the lyrics back to me. “All of these are classics examples why I can’t stand your music. There’s no meat to any of these songs.”

“Yeah, but songs like this give me enough money that once I’m old enough, I can do whatever I want.”

“Maybe you should figure that out.”

She leans her head against her arms as they rest on top on her legs. This does nothing for me to keep my thoughts in the friend zone. Not when she’s drawing attention to her legs and how her leggings cling to her calves and thighs. A lock of her hair swings lose and I wrap my finger around it.

“What would you do with the money?” I ask.

“If I had the money I’d save it for college.” Her eyes flick between my fingers and my face.

“Other than school, what would you use it for?”

“Maybe to go somewhere exotic. Someplace I wouldn’t be able to go see otherwise. But I don’t have that money, you do,” she says.

“To be honest, most of the money is tied up in shit that I don’t even understand. Part of it is for my sister's doctor bills and college fund. The rest Mom has someone manage for me.”

I sigh. I don’t know what part of my life someone else doesn’t control. Or how or when it got this bad.

“So these crap songs draw bank. Is that what you want to be known for, though?”

No it’s not. I’ve known that for last few months. Reading these lyrics cements that. I press my lips to her temple and get up to go. “Thanks, Maddie.”