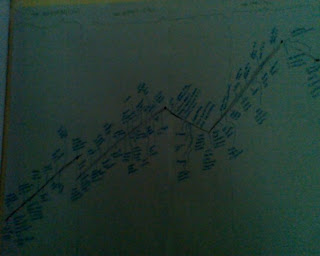 This dark sketchy picture represents the last complete draft of FALLING TO NORMAL, the young adult novel I'm shopping around. Or was until I got no hits from the queries sent in the last half of 2009, now I'm in revision-o-rama.

That is, the revision process. More specifically as it holds to this project. When I began this years (and I do mean years) ago, the first draft was done in by the seat of my pants fashion. While fun to write, it's a bitch to revise.

Why's that?
Because it's hard to connect all the scenes together and not sound like something the cat would create. (Assuming that The White One could write.) With each pass, my timeline shrinks and more events are left out. This is making it more difficult to create a strong story arc and really showcasing my protagonist's growth.

So your revision isn't going well?It's not going as planned.

The process is much slower than I anticipated, partially because I had two deadlines for workshops I needed to meet using my first pages. I made a lot of notes during my last read and I'm making sure that I'm incorporating all of them, which is taking some time.

I've also put myself in a holding pattern until the 8th of February so I can get feedback from the workshop I'm hitting on Sunday. My hope is that they'll ask me thought-provoking questions that will unlock whatever is trapped in my brain.

We'll ignore the fact that Bejeweled Blitz's new features were calling my name the past few weeks.

But you said no more Bejeweled. You liar!
I know.

So when will you finish this draft?
My goal is the end of February so I can edit my NaNoWriMo project during NaNoEdMo, but I'm not going to rush it. At this stage of the game, rushing would be a train wreck of epic proportions. If I'm not done, I'll carry over into EdMo.

So what will you do this week?
My gut is telling me that there is something inherently wrong with the manuscript as it stands, and since you can only query agents once per project, I don't want to dirty that pool. So, my free time this week will be devoted to finding that problematic element and slaying it. I'll be reviewing the plotcards and doing a lot of manual work (story maps, charts, etc.)

Oh, anything I can do?
Yes! If you've been in a similar situation, comment below. How have you fixed problem manuscripts?
Falling to Normal revising writing