Zombie Thursdays is a weekly feature with guest blogger, Miranda. You can read more about her here.
That's right! It's time for another addition of Zombie Sex-tacular! But don't worry, today's blog is rated PG for the kids... kind of... I think...
Recently, Alicia was displeased that my blog entry about "Haeckel's Tale" was the top read entry on the blog. I argued it was because people had an interest in Clive Barker or the Masters of Horror series. But Alicia thinks it's because people are freaks and just like the zombies getting it on. "Haeckel's Tale" is most assuredly rated R, and although I'm sure that entry was read by some minors, I thought, "shouldn't I write about something for the kids?" And because Alicia's blog focuses a lot on young adult novels, I found a series of books that are not only about sex and zombies... but also young adults!
Generation Dead is the first novel in a series of books by author Daniel Waters. While the next two books have different titles (Kiss of Life and Passing Strange), they are considered a "Generation Dead Novel." The story line has a very interesting premise and take on the zombie mythos-- all across the country, people are legitimately dying, but then anywhere from eight minutes to eight days later are coming back to "life." The catch is, it's only teenagers, mostly those 13-17 years old. No one has been able to explain why this phenomenon is occurring or what causes it. The teenagers don't come back as blood thirsty, brain eating zombies. They are basically their former selves, however many tend to move much slower, they don't need to breathe or eat. They don't even sleep and can't feel cold or heat, or even pain for the most part. 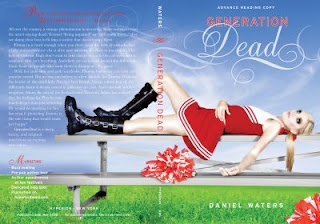 This cheerleader is not a character in the books, but she has awesome boots!
The first book revolves around a "goth" girl named Phoebe and a love triangle she finds herself in with her life long best friend from next door, Adam, and a "differently biotic" (aka- zombie) boy, Tommy. Tommy is a very high functioning zombie and can speak very clearly and even joins the football team (although to many protests from the community). Not every zombie is as articulate as Tommy. Some when they come back can barely speak or walk; it may take them five minutes to get one sentence out.
Tommy runs his own blog-- mysocalledundeath.com (and yes, this is a real tie-in website to the book series where you can read Tommy's blogs as well as blogs written by other characters). Tommy is an advocate for differently biotic rights and has many theories as to why some zombies come back "better" than others. His main theory is... LOVE. Yes, Tommy believes that it is love that makes zombies articulate and mobile. To test his theory, he starts dating Phoebe and thinks that if a living girl would just kiss him (or more?) that it would bring him back to life!
I don't want to give any more of the story away as there are three novels so far and the plot becomes quite a bit more complex, especially in the love and relationship departments. They are published by Hyperion Books which is owned by Disney. Methinks I smell a movie in the future... However, kudos to Disney because there is a lesbian character revealed in the later novels, although I did notice that in the novel where she comes out, the Disney logo was dropped from the front cover... hmmmm...
This series is definitely worth checking out! I am really intrigued by some of the questions it brings up-- Can there be romantic relationships between a living person and a zombie? What causes the return to "life" and why is it only teenagers? Should these zombies have legal rights and citizenship after death? (So far in the books, they do not have any legal rights; the novels do have a lot of political undertones.)
Some down sides to the series are that they are not the most well written novels ever. I find some of the dialogue hard to digest, but I find that often happens when an adult man is trying to write for a sixteen-year-old girl (think James Patterson's Maximum Ride series). Also, in book two especially, the editing is TERRIBLE. It was so bad it really distracted me from the story. I'm used to seeing maybe one or two errors or typos per book (hey, it happens), but it seemed like there was some error every chapter, and not just spelling errors. In one case it read, "Tommy said..." when it should have been "Phoebe said..." I figured it out, but a younger kid might have a difficult time with the content inconsistencies. Hopefully if they are released in paperback editions, they will be fixed up a bit. So far (and I'm half way through the third novel), Passing Strange has been much better in the editing department. 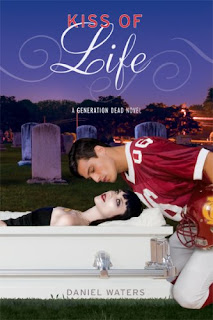 These two are apparently Phoebe and Adam, except Phoebe doesn't die in the novels (so far...)
Like any good novel written for kids it is filled with dating angst, lots of making out, many sexual references, especially to boobs (one character even calls a girl "Pinky McKnockers"), nudity, and some under-the-shirt fun. I always feel a little awkward reading stuff like this in a book made for teenagers, but the reality is that the kiddies like the sex. And apparently they like the zombie sex too!
Daniel Waters Generation Dead novels Reviews sex young adult zombies